Winter is always a good time to learn from others and rethink own theories. It is worth underlining that we have never been dealing with the flexion of knee joints before, mainly because it is not possible to apply the theory of natural limitations in this action. However, in view of our previous important discoveries concerning the Controlled Draw Pattern, as we have been always thinking about making the swing even more automated, we can now apply our newest findings. There is no automation big enough for an imperfect human being, mind you all.

We have been lucky to find recently quite a lot of tremendous YT vids about Mac O'Grady philosophy (published by several of his former students * -- obviously the content is not that prohibited any more as it was before). In several ot them, Mac stresses the importance of feet positioning and corresponding to them actions of knee joints during both the backswing and the downswing and it got us observing and thinking. Also we have just lately seen an excellent vid from a lesson Mac gives to one of his students about methods of playing the draw where he explains how to do it (by the way, nothing revolutionary here for us -- diagonal stance, closed alignment, bending the plane line, delaying the rear shoulder's action, slowing down the pivot during the downswing, increased secondary axis tilt, wide lead side at impact, etc., therefore, nothing that could help us in what we have already proposed with the Controlled Draw Pattern). Anyhow, this draw swing itself is simply beautiful:

What has drawn our attention then ? Not the very amount of the knee bend, as we knew that Mr. O'Grady liked to bend his knees a lot -- however, the increased amount of bending of the lead knee while still having the hips open ! We have to remember that if we want (in our Controlled Draw Pattern) to have hips open to the baseline while having an increased axis tilt and the legs wound up targetwise --  the amount of the lead knee flexion is practically always not biger (and sometimes smaller) than the rear knee one sort of by default. See below:

As we shall see later on in this article, the author's draw swing motion is being a bit stymied by the knee flex type that should be used for fades (not a big surprise for me as when I was younger and healthier I worked on fade patterns almost exclusively). We started to implement a correct knee flex leveling procedure for draws a'la Mac O'Grady and the results are tremendous. It automatically helps to deliver the clubhead from the inside and eliminates some errors that appear occassionally as e.g. throwing the clubhead too much to the outside that can end with heel shots or shanks, especially when trying to hit a powerful shot. What is also great -- it does not worsen the conditions of obtaining the long flat spot, despite some concerns from our part as we know both from Phil Rodger's as well as from our own experience that no excessive knee bend can be not good here.

Observe how Mac adjusts both his lead knee flexion as well as position in relation to baseline and pay special attention that he appears to bend the lead knee more than necessary (for a draw only, mind you):

Let us quote here 'The Stack and Tilt Swing' book: "Players who swing too far out to the right have a tendency to flex the right knee too much on the downswing. As the club comes down, your right knee should flex from its straight or nearly straight position at the top, but it should never flex more than it did at address". And later the authors suggest the following fix: "Set your right leg straight at address and keep it straight throughout the swing [...]". Of course the first part meets our approval as we do prefer always to have a setup-dependent swing motion -- we have developed our special procedure for our Controlled Draw Pattern to which it is very easy and natural to implement the knee flex leveling  procedure.

For a better evaluation watch also someone as significant as Sam Snead preparing for a draw during his Shell match against Ben Hogan; observe carefully the whole set-up procedure of this master and pay special attention to his version of the knee flex levelling procedure...:

...and his whole beautiful swing motion:

The very procedure can be easily implemented into the procedure of creating the diagonal stance. My own simple one in our Controlled Draw Pattern is somehow similar to Mr.Snead's one and consists of the following points:

- standing parallel to the target line with feet together and the ball in line with the right foot;

- instead serious withdrawing the rear foot to the South-East we rather use both feet; first, we place our lead foot to the North-West (the amount depends on how big a curve we want to play); it will automatically create the necessity to flare out the rear foot (sometimes even withdrawing it slightly especially with longer clubs) so that we could adjust our head, body and knees with that new baseline created by our feet; note that the ball position is now in the middle of the stance no longer in line with the right foot;

- when the rear foot is flared out we can perform our correct default taking of the diagonal stance with all usual elements with presetting of the rear ankle and rear knee; what is worth reminding it is not possible to bend the rear knee too much in a preset condition;

- we introduce now the levelling of the knee bend starting by flexing of the lead knee so that it matches the draw pattern baseline while having the hips line slightly open to it (because of the diagonal stance set-up followed by the winding of the lower body a'la Abe Mitchell);

- we do not forget about establishing the pronounced primary axis tilt which makes us see the ball even more forward (see the article titled 'Gaining the Setup Automatism in the Controlled Draw Pattern. Finally a Bliss for RED Golfers');

- in fact, our concept procedure is a mix of Snead's and Trevino's; if you remember, Trevino (who played a push fade) always moved forward by a step or two before starting his motion; we do not move forward but just use lead feet more than Snead did.

See it below in sort of an exaggerated mode:

As Percy Boomer wrote very wisely in his book 'On Learning Golf' -- "The difference between the good and the oridinary golfer is that the good one feels his shot through his address." I am not a good golfer in any case but I can tell you that I started to feel shots through my knees' position at address -- when my knees are being levelled for a draw, I feel my shot will be a draw. What is interesting, I have never felt it before so clearly. It is a great feeling.

And now we would like to present to you all the comparison of Mac O'Grady playing fade (left) and draw (right) in three crucial stages of the swing motion; please pay attention to the following aspects in the coronal plane (DTL view)... 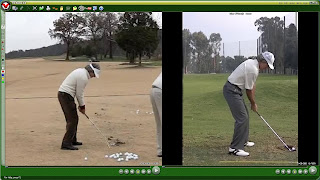 ...the lead knee not visible (left) while it is visible (right) -- the essence of the knee leveling procedure despite the classic diagonal stance in both cases... 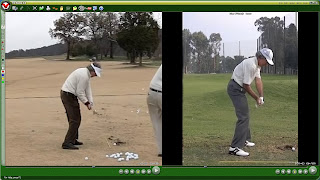 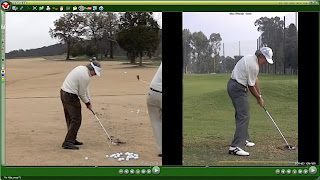 Professional players and professional teachers would certainly mention many more things when playing and teaching how to curve shots. Opposite to them we have always been concentrating on achieving straight as possible shots in an automatic way. Our work on the Controlled Draw Pattern for senior and body handicapped golfers, however, demanded some work on this subject though -- and the result is great, in our opinion, if one is capable to control the shape of shots just by proper aiming and the knee flex levelling procedure. It is simply plain, easy and efficient.