Melting Two Hands into One. Rear Hand Joins the Puzzle.


In the previous article, we described the most efficient way of obtaining the stablest possible lead hand grip. We also mentioned that adding the rear hand is somehow automatic because it is forced by the way the lead hand has ben put (thanks to matching some lego pieces such as the lifeline ditch of the rear hand matching the lead thumb or rear pinky finger matching the joint of the lead index finger in the overlapping process). However, we said nothing about details of rear hand grasp mechanics.

Analyzing carefully both the anatomy of the hand we should concentrate on the three fingers of the rear hand -- the thumb, the index and the middle fingers as these three fingers are created to work together. The ring and pinky fingers' role is much smaller here. Golf instruction sometimes is of the opinion that two fingers -- the middle and the ring one should work together and be the essence of the rear hand grip -- but we do not agree to this idea for obvious reasons described above. We also do not agree to Ben Hogan who said that the thumb and the index fingers are the main wreckers of the game, unless we add the second part to the sentence, namely "...if they are being used poorly". On the other hand, Julius Boros's book "Swing Easy, Hit Hard" contains a very interesting advice of locking the rear hand grip with exactly these three fingers that are of our interest. It is to be pointed out that the five fingers are controlled by two different major nerve systems. The median nerve activates the index finger, the middle finger and the thumb. The pinky finger and the ring finger are connected to the ulnar nerve. These fingers, which are controlled by two separate nerve systems, simply must represent different functions and be responsible for different tasks. 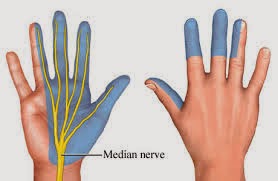 The three fingers should work together and guarantee both the stability as well as give some room for precision work. Fingers react very quickly and our subconscious mind has no problems in influencing them if necessary during the motion and these three working together are a perfect executioner of orders, so to speak. Do not be afraid to hold the handle firmly by these three fingers, they will do their job perfectly; this structure will even help to make the rear hand grip more stable because of already engaged muscles and ligaments. 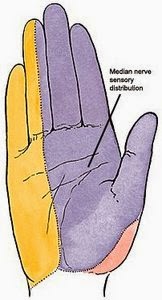 Ben Hogan said the hands should be the clamps on the grip. The clamps should keep the object as well as possible and as tight as possible -- not in the sense of pressure but in the sense of space.The lead hand index finger (that naturally is distant from other three fingers because of anatomical facts described in the previous article) should be moved on the grip back to the middle finger by joining rear hand which should tighten the lead hand fingers as much as possible. It will make the lead hand index finger's proximal inter-phalangeal joint raise excessively which is good anyhow since we expect the rear hand pinky finger to wrap around this joint so that the firm and secure overally grip is being formed -- and it is easier task to do correctly if the joint is raised. It is to be underlined  here that the tighter in space the clamps are the better it is for activating the wrists to perform their role optimally -- adding a "flick" Sir Henry Cotton talked about, so to speak. Clubs' grips should be placed in the closest part of the finger to the palm, called the proximal phalanx (between the metacarpophalangeal and the proximal inter-phalangeal joint), of the middle and ring fingers of the rear hand, and from here the process of tightening in the space should take place and, finally, the rear hand should wrap around the thumb of the lead hand and the club's grip.


Last but certainly not least, recommended using of the two last fingers of the lead hand and the three remaining ones of the rear hand can create a great mental image of one melted hand on the grip. It is a great feeling to be able to imagine this while preparing to start the motion. When we have such a perfect grip both hands work excellently bringing a very stable but, simultaneously, living release. Watch the below animation and pay attention to the author's hands and wrists...:

...and compare it, with a due proportion, of course, to the best release ever (a perfect combination of the push and the slap-hinge in Cotton terms) of the post-secret Hogan, the most accurate ballstriker ever, not mentioning Moe Norman:

What can be added to this material -- interestingly, a word or two about one of the best ballstriker on today's Tour and his grip. Everyone knows that Jim Furyk uses a double overlap grip with not only pinky but also ring finger on top of fingers of his lead hand. In view of the fact that the ring finger is a border between the median and ulnar nerve systems, it can be used as a pair to the middle finger as well as to the pinky one. This kind of grip is, from this point of view, equally logical to the standard overlap grip. Some would say that it has some advantages, as e.g. limiting the impact of the rear hand or helps to form a proper biokinetic overlap grip for people with smaller hands/shorter fingers or simply with weak hands. The feeling of clamps on the grip is vividly present here. 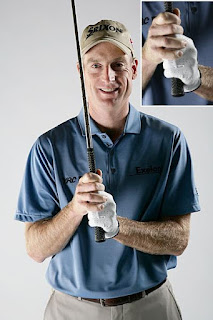