We already know that the process of opening the shoulders has to be delayed in the Controlled Draw Pattern. Since the rotary motion is very prevailing for us humans taking into account the orientation of the motion while maximizing power unintentionally it is relatively very tough to control the amount of turning shoulders in relation to hips. While looking at the great drawing taken from one of Sir Henry Cotton's great books below let us deepen into the subject throughfully: 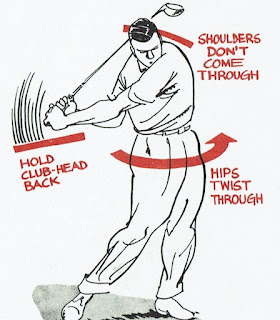 Human anatomy calls the body part between hips and shoulder girdle the thoracic/abdominal part. Together with pelvic region this part forms the so-called trunk or torso. Many golf theorists that were not anatomy-literate had difficulties in understanding that the thoracic part is much more merged to pelvis than to shoulders and, thus, often separated hips from what is above the waist. The consequence is that even if they understood the sequentiality of the motion well (i.e. they wanted hips turn before the shoulders during the downswing phase so to speak) they introduced unnecessary timing element even without knowing about it as they wanted their students to use their mid-torso together with shoulders and the effect was that there were three parts moving separately from each other.

The answer is very simple and effective -- if we follow anatomy and its nuances we will merge the rotation of the pelvic area with the thoracic/abdominal part which will mean the whole torso (trunk) is going to move as an unit and can easily move in opposition to the shoulder girdle. Moreover, It is de facto easier to turn hips together with torso as they are less mobile as they cannot protract and retract (protraction and retraction occur only in two major regions of the body – the scapula and the mandible) hence the shoulder girdle can be more separated from the torso in its movement and it is able to move in a completely different orientation which is very helpful in our Controlled Draw Pattern, the more we talk invariably about the rear shoulder in depression and the lead one in protraction.

Someone could ask why not to limit the motion of the hips and move them together with torso and shoulder girdle so that the timing issues can be eliminated. Unfortunately, the timing issues will paradoxially occur in a bigger scale as limiting the turning motion of the hips in the downswing is against the cascade of biokinetical events for a biped and would require lots of timing to control it; it is partially possible to convert its rotary motion orientation into linear one (as Stack and Tilt gurus suggest) but to do it just to ensure demanded motion of the shoulders while introducing a huge timing factor is just not wise; it is much better to create as big angular gap between pelvis and shoulder girdle as possible starting already at setup and letting the shoulders do their job unintentionally. Hence the big role of Antithetic Waggle concept that we are returning to a bit later in the article.

It is worth noting that this configuration of both shoulder joints (even including a pronounced axis tilt preset) can be noticed in the famous scene from 'The Greatest Game Ever Played' movie (above; we were lucky to find this fragment on You Tube) when the old Scottish pro Alec Campbell gives young Francis Ouimet a lesson before his US Open battle against Vardon and Ray and uses a stick making his lead shoulder protract while rear one depress and, simultaneously, closing his shoulder girdle in relation to his entire torso. What is extremely important, it all happens during the set-up phase, therefore, it is exactly what we always appreciate in our set-up-dependent swing patterns -- of course we can do it without anyone's help using procedures described in detail in previous articles.

Now we have to go back to one of much earlier articles of our site named 'The Antithetic Waggle'. We have concluded there that the waggle Hogan used could be named "the antithetic waggle". The word 'antithetic' means 'in diametrical opposition' which describe perfectly what is going on with the body. When one waggles the club back one should move the legs and hips into the opposite direction, like one wants to maintain symmetry in the sagittal plane. Now we want something more, i.e. diametrical opposition of the whole torso (hips and thoracic/abdominal part) against the shoulder girdle.

Please look at Mr.Hogan here and pay close attention how his body goes in diametrical opposition to his arms:

Now associate this image with much more pronounced rotation of the whole torso anticlockwise against the protraction of the lead shoulder and the depression of the rear one with the arms waggling as in Mr.Hogan's case. It creates a pretty strong opposition, strong enough to rename the whole notion to "The Antithetic Body + Waggle" (when "+" means something deliberately added to the concept). Since this new procedure presets everything very well in this area of the body at setup we have nothing more to do in this section but proceed to start the motion right after. Our body is prepared to follow this achieved preset all the swing up to the impact phase letting us enter it with open torso and a little closed shoulders. Just exactly as on the following pic of Mac O'Grady playing his draw at impact: 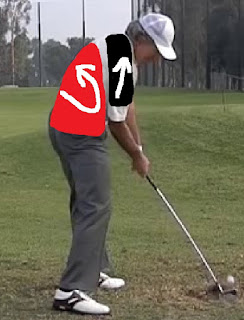 By the way, we chose this swing to illustrate the idea as it is known that Mac plays a draw here (since it is described this way in You Tube channel where we found it). Besides O'Grady is a swing motion stylist who based his swing motion on Hogan and Snead which is a very good recommendation for us. What is also important and it is a link to this film Alec Campbell lesson -- if we take a look at Mac's address position it is very easy to "see" an invisible Campbell's stick making his lead shoulder protract resulting in making his lead arm appear over his rear one still at address and, simultaneously, making his rear shoulder depress (our Controlled Draw Pattern would ensure the address position even more similar to the impact one mainly thanks to the new Antithetic Body + Waggle procedure): 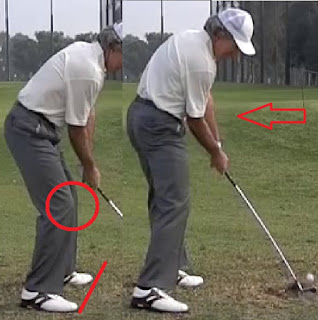 P.S. Although it does not belong to today's subject it is worth noticing that both O'Grady as well as the author of this blog used proper diagonality of his stance closing his feet line while letting his hips be slightly open at set up (his lead knee practically covered by his rear one and his lead hip not visible at all).