Mr.Hogan's Contribution to the Idea of Automating the Motion


I daresay that the words 'automatic' or 'automatically' are key words for the whole book. These notions were used 12 times in the most famous book in the history of golf instruction titled "Ben Hogan's Five Lessons. The Modern Fundamentals of Golf". Let us have a closer look into this topic and validate the point that Ben Hogan wanted as large automatism as possible in the motion and he believed that crucial positions or movements are to be achieved automatically. 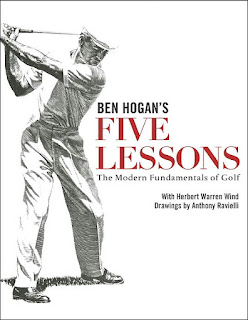 If one asks for the most concise summary, the book's content may be shortened to the following main points:
- stance governs automatically correct pelvic motion;
- pelvic motion governs automatically shoulders motion;
- shoulder motion governs automatically arms and hands that do nothing (active, conscious) in the swing provided one has a correct grip;
- provided the backswing is done correctly the downswing is a chain of unintentional biophysical events following each other automatically because there are no other options left.
Not by coincidence, the last sentence is the essence of the theory of natural limitations in the hard structure of human organism and, consequently, a firm motto of the Biokinetic Golf Swing Theory.


THE CORRECT STANCE ACTS AS A PERFECT AUTOMATIC GOVERNOR ON THE AMOUNT OF HIP TURN THE GOLFER CAN TAKE (AND SHOULD TAKE) ON THE BACKSWING. (p. 43 of the book) 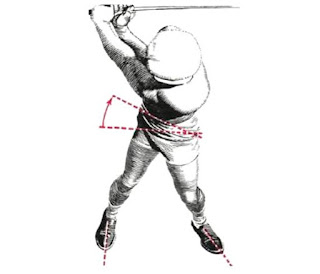 We do not need to mention that, according to the SPC concept and the Diagonal Stance idea (especially rear leg ankle and knee joints presets), a golfer can position his joints during setup the way they cause an automatic transition from the ground up. Hogan underlines here especially how to achieve automatically a correct hip turn followed by unintentional using of the tension between hips and shoulders area.

The downswing, you see, is initiated by turning the hips back to the left. When you have this stored-up tension in the muscles between the hips and the shoulders (and in the muscles of the thighs that work with the hips), you have something with which you can begin the downswing. (This tension will, in fact, automatically help to pull you down into the ball.) As the hips turn back to the left, this turning motion increases their tension. IT IS THIS INCREASED TENSION THAT UNWINDS THE UPPER PART OF THE BODY. IT UNWINDS THE SHOULDERS, THE ARMS AND THE HANDS IN THAT ORDER, THE CORRECT ORDER. IT HELPS THE SWING SO MUCH IT MAKES IT ALMOST AUTOMATIC. (p. 71 of the book) 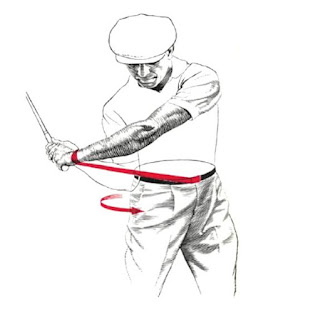 The turning of the hips inaugurates the downswing. This movement of the hips automatically lowers the arms and hands to a position just above hip level. (p. 94 of the book)


It would be tough to find a better concise prayer for sequentiality of the motion both from the ground up as well as from the core out.

The last paragraph, however, strikes even more important aspect, namely, lack of conscious actions and using a subconscious-friendly unintentional motion where there is no place for independent arm or hands activities. Properly built grip and a great body action is enough.

THE ACTION OF THE ARMS IS MOTIVATED BY THE MOVEMENTS OF THE BODY, AND THE HANDS CONSCIOUSLY DO NOTHING BUT MAINTAIN A FIRM GRIP ON THE CLUB. (p. 82 of the book) 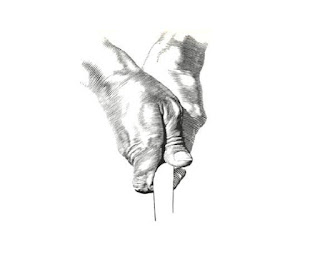 Finally, Mr.Hogan underlines that the timing factor is being considerably reduced provided the automatism is being brought into the swing and forms the chain of subconscious-friendly physical events -- what is, not coincidentally, our main goal in our biokinetic golf swing theory.

The golf swing we have presented in this series is the essential golf swing, stripped down to its authentic fundamentals. They are all the golfer needs in order to develop a correct, powerful swing that will repeat. If he learns to execute these fundamental movements—and there is no movement in this swing which a man or woman of average coordination cannot perform—he will continue to become a more and more skillful player. He will not have to worry constantly about his timing, for example, as does the player who thinks he can construct a swing on hand action and who, since this is impossible, is doomed to be erratic. The golfer whose swing is founded on chain action cannot help but have timing. The swing is already timed for him. The chain action itself is the timing. (p. 122/123 of the book)


It is a marvellously great thing to find out that the best ballstriker that ever lived and the biggest authority in golf until now sought for and found somehow the same goals as the author of this site. Thank you, Mr.Hogan, for a continuous inspiration.


Let us continue with the analysis and let us suggest some good solutions. We know that the best scenario is being a LED, LHD and RLD person. Let us start with eye dominance issue here.


Lee Trevino, one of the best ballstrikers that ever lived, appears to be a RED person. With his famous three steps forward setup procedure he moves targetwise the whole body alignment making the room for his rear eye's vision while being able to achieve a full shoulder turn.

Of course, such a manouver must open the stance which Trevino was known for. The trick is not to open the below-knees section as well as keep the upper body closed in relation to hips, exactly as in case of the diagonal stance. Trevino was famous for his consistency but he himself admitted his golf was not universally good for all courses and we dare to say it was because of total lack of diagonality in his stance.

We had spoken about this before in one or two of our articles that RED persons should setup with the rear eye just behind the ball which means the ball position is effectively being moved antitargetwise. No change to the diagonal stance as the very concept, just the ball position is different: 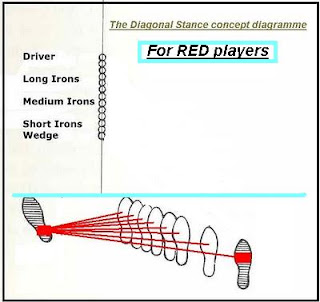 Another solution, suggested by a famous Australian tour player Bradley Hughes, is to limit the rear hip movement during the backswing that enabled him to have a lot of upper body turn against that resistance. We know very well how to do it through both rear foot position as well as rear leg joints preset from the ground up.

All the above is much more natural thing than trying to implement a LED person's head movement by force to a RED one, such as e.g. on a famous short film where Sam Snead (who obviously was a LED person himself) tries to help a RED golfer achieving fuller shoulder turn during the backswing and, simultaneously, implementing a very unconscious-friendly timing-inducing move.

Last but not least -- the backswing a'la Stack&Tilt with the body leaning stacked over the ball during the backswing stage is a good solution with similar effect to Trevino's procedure (brings rear eye onto the ball) but deprives the motion with the help of the rear side of the body in automating process of the whole motion. Thus, we do not recommend it as the best solution for offsetting disadvantages of the rear eye dominance in golf.

The next one is handedness and how to offset the disadvantages of being a RHD person. Obviously it can be achieved through tiresome practice aimed at training non-dominant lead arm and, therefore, achieving more ambidextricity or through anti-subconscious-friendly and timing-inducing intentions aimed at using one's lead arm as a motor of the downswing action, often leading to handle dragging and all faults it might cause.

Many people are not aware that with a good pivot and proper sequentiality of the motion it is almost impossible to deliver lead wrist in a dorsi flexed position to the contact with the ball. It does not require any training of the wrists or hands. It is of no special importance if lead wrist starts to flex after contact even still in the impact zone provided the contact was superb. It is even natural to let wrist react this way. The problem does not affect LHD golfers at all while RHD golfers are prone to lead wrist flexing earlier. We suggest to not deal with this aspect if there is no special necessity. It there is some -- start with working out a good pivot and sequentiality through optimizing stance and adopting trigger compression. The desired consequence is described by the SPC concept.

RHD golfers are also prone to OTT motion since a premature attempts to power the motion via rear arm will always naturally steepen the plane. As explained in the 'OTT from Inside' section, nothing to worry about. Just one needs to adopt this motion. That is why the role of such elements as diagonal stance, biokinetical grip or sequentiality of the motion from the ground up cannot be overestimated. They mechanically promote shallowing the shaft despite the hands downswing plane goes over their backswing plane and, therefore, help to create proper conditions. It is much better than to try to implement anti-subconscious-friendly actions by force and wasting time. We can see how it looks on my own example:

Lastly, the footedness. Here the case is the least difficult since in golf legs are not a precision instruments as e.g. in soccer. They should create the base for the motion as well as ensure a proper guidance for the upper parts of the body from pelvis up. There is a subtle difference though between LLD and RLD golfers. The first will tend to have their lead legs take the whole work during the motion (remember the 'bouncing' leg ?). LLD golfers are prone to leave too much dynamic weight on their lead leg during the backswing as well as to get rid of their rear leg help prematurely during the downswing reducing the possibility of using ground forces in the optimal way. Learning how to set the rear foot and how to preset ankle and knee joints is crucial here. LLD golfers should benefit from leaving a bit more room in both joints so that there is more external rotation allowed in all joints, hip one included. Rear femur there goes into a position that promotes squatting which, in consequence, enhances using rear leg leverage unintentionally and makes it tougher to shift the weight totally onto the lead leg prematurely. Moreover, it will additionally help to increase distances, just as the best long hitters, such as Sam Snead and Jack Nicklaus did.