The flat spot must be as long as possible, therefore, the first contact with the soil must be done some time before the ball, not just before the ball so that erroring at hitting thin or fat can be eliminated. On the other hand, it cannot end just after the ball for the same reason . It cannot be V shaped since the timing of finding the low point would play too big a role. The sole of the clubhead should sweep through the ball. Moreover, the vertical swing must be wide, its radius must be as long as possible (remember the Jack Nicklaus's basketball image). The takeaway as well as the follow through must be wide and as long on the baseline as possible. A decent width of the swing arc is being achieved without its depth ! We are killing two birds with one stone here -- the arc is closer to our target line all the time during the swing motion and the pivot is not that critical which is very important for body-handicapped golfers. Also, the shoulder downswing plane is much less physically demanding than elbow downswing plane (especially the EEP). 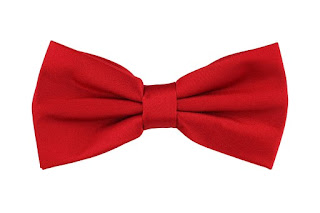 First aid we can get is visual image of what we need to do. I am a bit familiar with the notion of the Bowtie method used to evaluate risks and consequencies. Our Bow Tie Concept is also based on the shape of popular men's decorative cloth but serves rather to minimize risks of playing bad shots. Let us juxtapose the image of the bow tie with the intercardinal directions symbolizing both backswing as well as downswing clubhead path (the flat spot in yellow covering the baseline close to the ball): 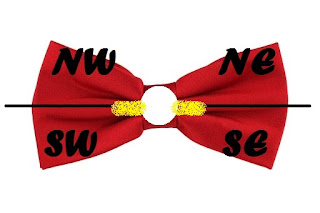 We see that recent golf swing instruction sometimes uses alignment sticks for training; they cannot be used in regular play though while the visualization of a bow tie on the ground in front of a golfer can be used everywhere and always. This image is very easy to absorb by the subconscious mind's eye (as on the bird's eye picture of Greg Norman), the more we are basically dealing with clubface perpendicular to the swing path in our work on the Senior Swing: 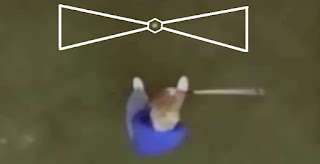 The two basic shot patterns, except of course the straight one, are the in-to-out SE/NW push pattern (where the flat spot is not short but is located long before the ball)  and the out-to-in NE/SW pull pattern (with almost no flat spot at all): 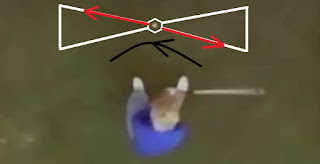 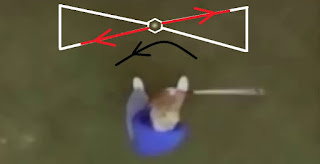 Searching for both lengthening as well as correct placing of the flat spot close to the ball we need to chart all the possible scenarios for shoulder downswing plane (single shift from EP to TSP in TGM terms). It is worth mentioning here that e.g. reverse OTT loop (examples: Furyk or Trevino) are associated with elbow downswing plane only (double shift from EP to TSP and back to EP in TGM terms) hence this very reduced number of patterns mentioned. It is worth mentioning that a typical in-to-in SE/SW pattern (below) is not useful at all because it is impossible for our brain to associate the pivoting motion with creating the linear flat spot idea: 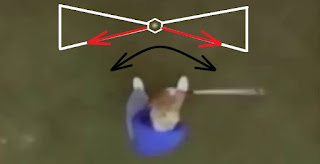 Let us start with a relatively common pattern for both ordinary golfers and great champions, a very subconscious-friendly in-to-neutral 'OTT from inside' pattern (SE/neutral) which is equally popular among elbow downswing plane golfers (e.g. Jones, Snead, Hogan, Boros) and shoulder downswing plane ones which we are interested in (e.g. Demaret, Mangrum, Irwin): 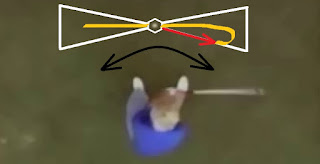 The problem with this pattern is that although the flat spot is close to the ball it is relatively shortish. To lengthen it without moving it back behind the ball we need to introduce an odd, at first look, the out-to-out NE/NW pattern: 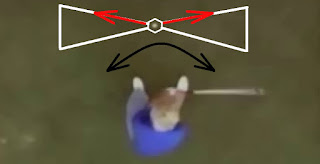 It is impossible to swing like that in reality, however, it is possible to sort of bend the reality for our mind while trying to merge a slightly outside takeaway with a slightly outside follow through which results in approaching the ball from inside. This pattern is totally compatibile with less amount of body rotation (that anyhow exists and flatten both red arrows to baseline) and conversion of depth into width (what we discussed earlier). Not coincidentally, the only one golfer that can be close to this pattern is the late Jack Nicklaus who wanted to find a pattern close to swinging the clubhead along the baseline while literally sweeping the ball.
His pattern is not as sexy as Hogan's or Snead's -- perhaps this is why it is hard to find theorists that would try to understand it and promote it. This was true in my case before when I was not interested to analyze anything else from the EEP pattern, but finally it seems simple ageing with all its consequences made me start researching and finding the swing pattern of best golfer that ever lived...