Ground forces create two kinds of motions - horizontally oriented and vertically oriented - as the orientation of forces can be horizontal or vertical as well. The latter are simple forces appearing thanks to altering our weight. It is very useful here to remember that the notion "weight" is always equal to a force:
- "statically" = your true mass x gravitational acceleration;
- "dynamically" = your true mass x gravitational acceleration +/- additional acceleration.
Vertically oriented motions happen because the weight changes, e.g. when you prepare to jump you create additional acceleration acting in the same direction as gravity, therefore, your weight changes which can be observed on the scales (with some delay though if we talk about mechanical spring scales). What always remains unchanged is mass.
Horizontally oriented motions are being induced thanks to shear forces that exists because of created torques in the hard structure of human's organism. The linear part is not being induced by the spine but by human's body response to simple physics ocurring from the ground up. Shear forces are strong enough to create torques that move the pelvis area targetwise. What happens with the spine as e.g. the secondary axis tilt is a consequence of this scenario. We already know very well (vide: the SPC concept) that automated targetwise CoG shift is totally dependent on what happens below pelvis and, consequently, on horizontally oriented forces.
Feet should be aware of and prepared to feel both types of forces. The optimal combination of horizontally and vertically oriented motions forces that there exists the optimal distribution of pressure points of feet. We remember from the Diagonal Stance concept that the surface of the feet is relarively very small comparing to the mass of the whole body, especially in a dynamic movement and, therefore, both feet should never be placed in line with each other in 2 basic dimensions (lead foot flared while rear one square to the target, rear foot taken back in relation to the lead one - both rules better visible the longer the club is). 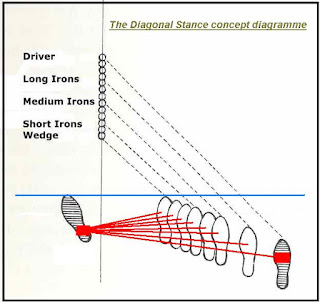 The red rectangles shows where the pressure is being allocated, white arrows shows the horizontal orientation of the torques (red arrows shows the same but without interaction between feet and the ground) and the white dots shows the vertical oriented forces. 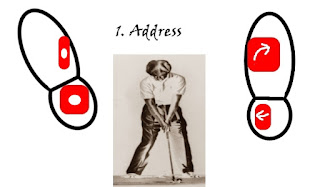 At setup, we need to ensure the firm rear side from the ground up via presetting the rear knee and ankle joints. The lead side uses only normal (vertically oriented) forces. The relation between the line joining most important pressure points of both feet (point under lead foot ankle joint and rear foot's balls area) and the target line is dependent on how closed is the stance, i.e. how long is the club one actually is using (according to the D-plane principles). 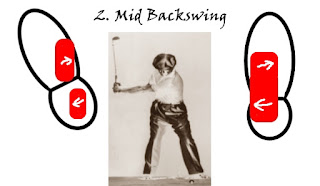 During the backswing phase, the pressure point of the rear foot gradually moves to the heel as the rear leg straightens and rear hip joint goes up and back. The preset done at address still exerts impact of torques that affects the rear side. The lead side being passive starts to correspond to it parallelly. 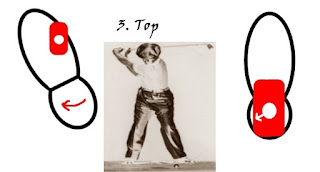 At the top, overtorques of the rear side joints set the direction of the automatic linear shift to the S-W (assuming we are facing North at setup). The lead heel rolls up and loses contact with the ground preparing to establish the new downswing vertical axis of body rotation. Lead heel will always come off the ground unintentionally if the pelvis works in a slanted way (at 45 degrees up & back with the whole body and arms working together) and there is a proper sequencing (the lead side is totally passive during the backswing letting the lead knee joint bent inside). The lead heel should replace at least the same spot, or better a tad closer to the target because of the vertical axis of rotation linear shift to the front side of the body in a perfect world so that the dynamics of the motion is utilized most efficiently. 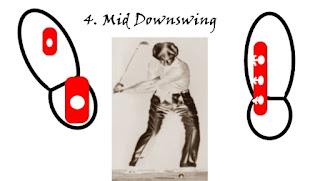 After the linear shift has been done and the vertical axis of downswing rotation has been established the main pressure point of the lead foot goes under the lead ankle, i.e. where the lead heels hits the ground. The rear side becomes to be passive and inertial, thus, the pressure point of the rear foot goes entirely near the inner edge. There is a slight impression of targetwise pushing from the rear foot since the overtorques have already been released and the pressure point stretches from the heel towards toes. The lead side uses the vertically oriented forces during the phase of pure rotation since the natural limitation in the lead ankle and knee joints has not been reached yet. 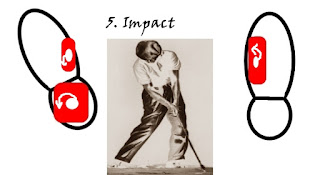 At impact, the horizontally oriented forces start to act, or better said, to accompany the vertically oriented ones, due to the process of releasing the stored energy which can naturally happen thanks to appearing strong torques in the joints. The rear heel rolls up and loses contact with the ground and the entire rear foot starts to spin out. 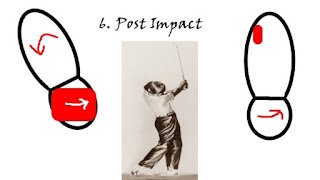 After the energy has been passed to the ball, the ground forces start to be of lesser importance. The lead foot spins out together with further post-impact body rotation while the rear foot loses contact with the ground almost entirely and often is being dragged - almost, i.e. there is some pressure left near the toe because of balance reasons.

The above visualization is totally in line with the SPC concept. For a more global view please go to the section where and compare coresponding phases of the swing motion.
Posted by Dariusz J. at 21:54

Ben Hogan's post-secret swing motion is rightfully the most respected one in the history of golf. He became the best ballstriker of all times despite countless serious adversities he had to face with in his life. Hogan was supposed to have developed himself a secret or secrets thanks to his genius and hard work - however, even he had his masters whom he learnt concepts from.

Wild Bill Mehlhorn - one of very few Ben Hogan admired and learned from in his early days. Hogan even said that Wild Bill was the best from tee to green he ever saw. It can be easily seen that such things as the trigger compression, sequential swinging from the ground up or the diagonal stance was being present in Mehlhorn's motion. Observe carefully and pay special attention to the way he set up before starting his swing. It is very obvious that Mehlhorn must have been very aware how to benefit from the ground forces.


Henry Picard's name is very often associated with young Ben Hogan. Picard was known for his generosity to other players, and Sam Snead credited Picard with convincing him to turn pro. Picard also offered to bankroll Ben Hogan when Hogan was struggling, then got Hogan into the field at the first tournament Hogan would win. He also helped Hogan eliminate his hook, and Hogan dedicated his book "Ben Hogan's Power Golf," to Picard. From this short material presented below we can easily see how similar was the kinetics of Picard's pelvis area motion to that of the best ballstriker of all times. Pay special attention to his rear hip joint linear motion at transition - it is a great example of the SPC concept in the pelvis area. Also it shows how important from the mechanical point of view is passive lead side during the backswing phase; Picard's lead heel does not stay on the ground as well as his lead knee bends inwards helping to set the correct CoG pelvis area shift and making the transition almost automatic.


Macdonald Smith - Ben Hogan was being said to get his famous pronation technique from Smith's marvellous pivot guided swing motion. Smith's action was the most observed motion in the hickory era. Pros studied his swing pretty much similarily to later colleagues standing for hours on range observing Hogan's sessions decades later.
Please take a look at 1:03-04 of the﻿ video (01:18:43-01:18:44) that looked exactly like Smith was just creating the firm rear side via rear ankle and knee joints preset described in the SPC concept. Look at the waggle, too. And the diagonal stance. Not mentioning more obvious things like trigger compression or low plane angle. Indeed, if someone had a good eye and had analytical mind a lot could have been learned from Smith. Mr.Hogan surely did.

Ben Hogan took a lot of inspiration from baseball swing motion. Low plane, perpendicularity of distal limbs to the core, active stance that makes both legs and feet live their own lives and great kinetic sequentiality from the ground up - just to name a few similarities between great baseball swing and this of the greatest ballstriker that ever lived. It is widely known that Hogan met both Byrd and Williams for numerous times and asked them about motorics of baseball swing motion.


The above examples would not solve all mysteries that accompany Ben Hogan's secrets. But surely they will give an excellent picture of the background as well as underline many common points that were present in the biokinetically almost ideal post-secret Hogan's swing motion.
Posted by Dariusz J. at 16:08