Wrist is the most mobile joint in the whole human body. It can flex, extend, deviate and perform all possible combinations of these motions. When we add also the pronation and supination of forearms it appears that our hands can move in practically all directions. In view of this fact wrists can be seen as chains in between nunchaku sticks joining forearms and hands gripping the club, hence joining practically arms and the clubshaft. This notion is very important for those who believe in lack of conscious actions in this area of the body. Let us remind here the famous quote from Ben Hogan's '5 Lessons' book:

THE ACTION OF THE ARMS IS MOTIVATED BY THE MOVEMENTS OF THE BODY, AND THE HANDS CONSCIOUSLY DO NOTHING BUT MAINTAIN A FIRM GRIP ON THE CLUB. (p. 82 of the book)

Mr.Hogan was of course right, as almost always. But the biokinetical truth is more complex than that. Our wrists are capable to both deviate in both direction (cock/uncock) and flex in both direction (hinge/unhinge); moreover, there is a coupling between these action described in our 'Omnium Trium Perfectum' article, namely that the most usual movement of the wrist is one of dorsi flexion (extension) combined with radial deviation, and of palmar flexion combined with ulnar deviation. Pure palmar-dorsal flexion (flexion-extension) and radial-ulnar deviation are movements that rarely occur in a straight plane. It is like that because when we want to maximize ulnar deviation range we unintentionally bow the wrist which means we flex it palmarily; conversely, when we want to maximize radial deviation range our wrist becomes dorsally flexed. It should give us the picture that the axis of wrist deviation RoM is not parallel to pure deviation motions but is slanted from slight palmar flexion to slight dorsal flexion just as shown below (we shall call it "the Golden Axis"):

Please note what scientifists wrote (https://www.ncbi.nlm.nih.gov/pmc/articles/PMC3260558/) : "The earliest notation of the functional use of conjoined wrist motions is attributed to Fisk, who noted the association of wrist extension with radial deviation and wrist flexion with ulnar deviation “when someone is casting a fly, throwing a dart, or conducting an orchestra.” Palmer et al showed that many occupational activities, exemplified by hammer use, involved an arc of motion from radial deviation and wrist extension to ulnar deviation and wrist flexion. These investigators popularized the term dart thrower’s arc to describe this conjoined wrist motion. Indeed, nearly all sporting activities, including pitching, racquet sports, fly fishing, javelin throw, batting, and golf also use the dart-thrower’s arc of wrist motion." 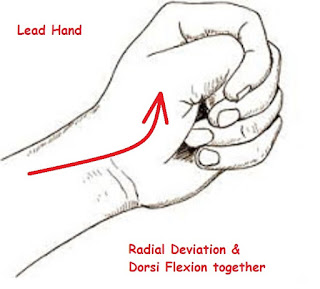 These motions along the Golden Axis are present in many human activities such as e.g. throwing darts or hammering nails. It shows us that this is the most effective and natural motion of the wrist -- not pure deviation or pure flexion/extension, but this coupling combination of , say, radial extension and ulnar flexion, a direction along a path of the dart thrower's wrist motion. A very interesting additional phenomenon is that the Golden Axis is the only one easily achieved and there is no other possibility to do it in another direction without the conscious help of pronation/supination movements of our forearms. Moving the wrist along the Golden Axis engages pronation and supination only in a slight necessary manner to perform the motion from maximal ulnar to maximal radial deviation. Moreover ,as beautifully described in the 'Solutions to Lengthen the Flat Spot. Part 4. Controlling Up and Down Movements: Automatic Shallowing via Sweetspot' article, further pronation/supination motions of forearms are just the automatic response for clubhead's CoG momentum. 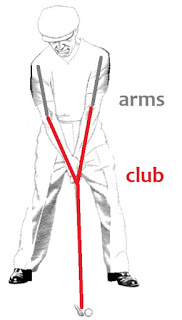 The clubhead momentum created after the top during the downswing phase is huge (the head is relatively heavy because it is located at the end of a long shaft) not only ensuring a strong hit at the ball but also enough large to create balance problems of the whole body at the end of the swing. The lead wrist after impact bends at an angle (and not just purely radially deviates) which can be easily seen when we try to maximize its range of motion up which is totally in accordance with the slap-hinge release principles. Momentum vector is in line to the axis of maximum radial deviation enforced by the help of dorsi flexion. Further motion along the Golden Axis leads to absorb the momentum in the most effective way as the limit of the lead wrist's motion range is being reached in the most natural and neutral way possible -- no excessive or intentional supination/pronation of forearms which is equal to clubface stability, repeatability and consistency of strokes within the pattern. It even can be a primary goal to eliminate conscious pronation or supination; pronation and supination of forearms should occur totally unintentionally; the follow through without supination of the lead arm and pronation of the rear one requires to be preceeded by the slap-hinge release (or, at least, by some elements of the slap-hinge release, i.e. dorsal flexion of the lead wrist after impact) since without it the sweetspot would wander off plane or would require a very strong pivot and pure push release (not a good option for seniors and body-handicapperd golfers) or just an early swivel as in the heavily timing-dependent crossover release.

This is extremely important for draw patterns that require long flat spot and it is crucial to have stable clubface all the time there -- fades basing on slight OTT accross the ball have a very short flat spot, hence potential problems with clubface horizontal stability are minimal comparing to draws.

Mac O'Grady (and his later successors as e.g. Stack&Tilt promotors) strongly recommended more or less conscious "recocking" of the wrists in the follow through phase as a power leakage  and lack of post-impact balance antidotum. From 'The Stack and Tilt Swing' by M.Bennet and A.Plummer: " The unhinging of the wrists  on the downswing is a result of the club gaining dynamic weight and your right arm straightening, both of which exert a strong outward force and cause the wrists to unhinge. [...] Rehinging is an important action that better players often do instinctively but that less experienced golfers need to focus on. Just as the club got heavy on the downswing, causing your wrist to unhinge, it should feel heavy after impact, so your wrist rehinge to absorb this force. [...] If your body is left to brake the swing without help from the rehinging of your wrists, the club's momentum can pull you off balance."

While we can certainly agree to the latter we cannot follow the first part. "Recocking" phenomenon happens entirely unintentionally when the shoulder girdle is not rapidly opening through and after impact -- simply energy of the club and clubhead coming from the body and arms forces wrists to cock. We are sure though that Mac O'Grady knew that the lead wrist had to cock and hinge together to maximize the bend because it can be seen on his swing videos while watching very carefully what happens with his lead wrist. It is more the Golden Axis bend than typical slap-hinge release only or plain naive thinking about "recocking".
Moreover, it is crucial to remember about dividing the motion of the shoulder girdle from the torso as we described in detail in our last article from this year. Then the only thing we should do is to let the clubhead momentum guide the wrists to move up along the Golden Axis unintentionally. As we can see on the comparison below the effect is practically the same, no matter if one is a great pro with athletic body and one of the best swing motions in the history of golf and the other is just an old body-handicapped untrained weekend hacker who trusts the Golden Axis: 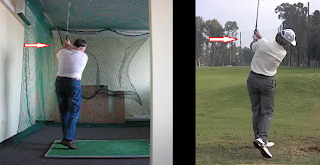 Seniors and body-handicapped golfers would bless the possibility of playing draws in a controlled manner without forcing their bodies to try to perform very tough moves, such as e.g. very strong pivot, straight arms after impact or maintaining tour-quality flexions and extensions of all joints. It is worth remembering that late Mr.Hogan preferred to sacrifice his overhuman accuracy as he couldn't score well with shortened discances; we all should consider the same attitude unless we want to suffer much worse scores or to play from women's tees. Here is a brief video summary dedicated to the Controlled Draw Pattern: