Solutions to Lengthen the Flat Spot. Part 4. Controlling Up and Down Movements: Automatic Shallowing via Sweetspot.


Well, first of all I feel the need to apologize to my readers that they had to wait so long for this article. Although the general concept was in my mind already after finishing the previous part, I still required more time than I thought to find the most automatic method of shallowing the club in the downswing without jeopardizing the longest possible flat spot idea. The solution was so simple yet deeply hidden as I have never suspected the way golf clubs are being built can be of any help in biokinetics. If only, I always treated it as an obstacle remembering famous quote of Sir Winston Churchill: “Golf is a game whose aim is to hit a very small ball into an ever smaller hole, with weapons singularly ill-designed for the purpose”. He was very wrong, but ad rem. 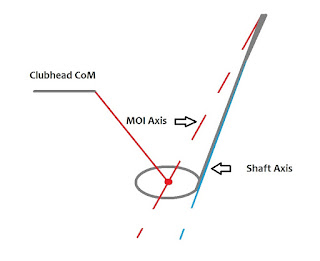 The whole golf club moment of inertia axis is neither the same as the shaft axis nor it is parallel to the shaft axis. This happens because heads of all clubs (except some funky patters) sort of stick out of their shafts. Thus, the axis goes from the top of the club through the center of mass of the head which corresponds linearily to the clubface sweetspot (in fact, the axis would run a bit closer to the heel of the clubhead, therefore between the clubhead CoM and the shaft, but for the better understanding of the whole phenomenon let us leave it as it is).
Now, when a club is in movement while this axis is above the shaft (as in address while the head is sticking up and North assuming we face North) simple Newtonian physics make the head open or closed, depending on the orientation of the movement and the position of the clubhead in relation to the gravity vector. Simply saying, during the late backswing it will be opening and tending to go down behind us while during late downswing it will start closing and go to the ball. 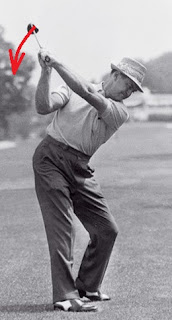 What happens when the head is opening and going down ?  The CoM of the clubhead tends to go first outside than under the shaft because of gravity. In consequence, it additionally supports shallowing of the shaft axis. I said additionaly because the very gravity and the mass of the head shallows the shaft axis per se no matter if the head is being open or not, however the process of further opening of the clubhead thanks to the clubhead MoI makes it much more effective. Moreover, if the clubhead MoI determines the way the shaft should be shallowed it means, no more no less, that the clubface sweetspot controls the optimal way for shallowing the shaft -- no matter what is the natural method of shaft shallowing for a given golfer (see: previous article).

But how can we achieve this unintentionally ? The answer is easier yet more revolutionary than ever suspected. We need simply to let the clubhead CoM and the whole club MoI axis lead our forearms during their movements. Lead and rear arm behaves differently from each other because lead one is straight and rear one is bent during the swing motion. When the arm is straight the humerus part and the forearm part rotate together, when it is bent the forearm rotates independently on the humerus, moreover, the humerus range of motion is much limited in this situation. Forearms and wrists can easily spoil the result of the swing by their intentional motions and affect badly the technique of achieving the long flat spot, thus, we need to get rid of them. 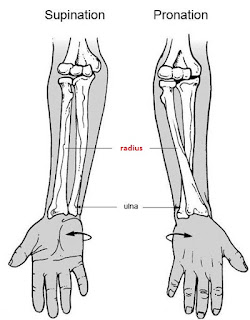 We need to view the whole arm-club system as both forearms are part of the club, not the arm (i.e. a "device" that brings the club into motion) and let them rotate freely according to the motion of the club. It is to be pointed out that both forearms wil match their rotary movements to each other automatically as their common goal is to hit the ball with the face of the clubhead. Moreover, the CoM of the clubhead will automatically "steer" the sweetspot to the ball in a shallow way ensuring a long and stable flat spot area. Hence the idea of hitting the ball with humera (as the element linking arms and golf clubs are elbow joints) is so attractive -- there is no further need to take into account either a complex two-bone movements of forearms nor even more complex multibone movement of wrists. Last but not least, the "shorter" are distal parts of the body in our mind the easier is to match their movements to the main body movement. The great Ben Hogan would surely agree to the above taking into account what he said about the role of hands in the swing motion in his 5L book:


THE ACTION OF THE ARMS IS MOTIVATED BY THE MOVEMENTS OF THE BODY, AND THE HANDS CONSCIOUSLY DO NOTHING BUT MAINTAIN A FIRM GRIP ON THE CLUB. (p. 82 of the book) 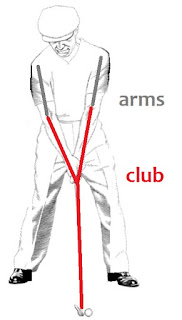 What is also important, the famous Hogan's idea of two-handed basketball pass can be easily described as a humera motion with unintentional and subconscious motion of forearms that can happen because of the friction between hands and the grip combined with the weight of the golf club and its MoI (remember -- the whole club's MoI axis !). Please look at the below drawing from the 5L book and try to differ the shadowed parts (humera "belonging" to the body) from unshadowed parts (forearms "belonging" to the club -- or to the basketball in this case):

The fundamental questions now are: what should we do to let the sweetspot guide our swings through that axis automatically ? And how to make our forearms and wrists be parts of our clubs ? Are there true simplified solutions available ? I have been looking for real answers and hence I did not want to publish the above article earlier...