Movement of the arm into elevation, which has to happen during the backswing phase, can have significant implications for the stability of the whole upper body and is being based on the coordinated movement of scapulae and humera. The most important thing is that scapulae do not lie completely straight against your back but they are angled slightly forward, approximately 30 degrees anterior (forward) to the frontal plane.  This is the Scapular Plane at which the arm elevation should occur so that dusrupting the overall stability is avoided. 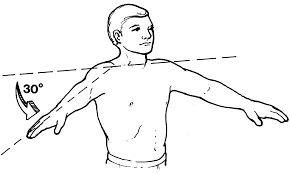 As read on musculoskeletalkey.com, "shoulder abduction in the scapular plane, often referred to as scaption, positions the greater tuberosity of the humerus under the highest point of the acromion and helps to prevent bony impingement, regardless of the amount of rotation of the glenohumeral joint. This can be verified by performing abduction in the scapular plane, with the upper extremity positioned in internal rotation, in neutral, or in external rotation. Scapular plane abduction is more natural than abduction in the pure frontal plane. The humeral head fits better against the glenoid fossa, and the ligaments and muscles (in particular, the supraspinatus) are more optimally aligned to promote proper shoulder mechanics". Scapular muscles are in best position to work with scaption angle. 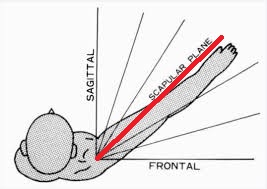 The Scapular Plane Humerus Takeaway is just humeral abduction alongside the angle created during set-up which should correspond to the scapular plane. Extension and external rotation parts happen unintentionally later on in the backswing phase because it is no other option left. When being at address the flexion part is already done because the torso is not perpendicular but slanted in relation to the ground while humerus is sort of perpendicular to it. Watch the following pics to understand the idea better -- at setup it looks like this...: 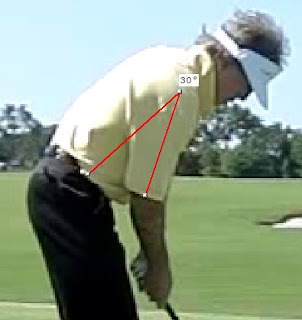 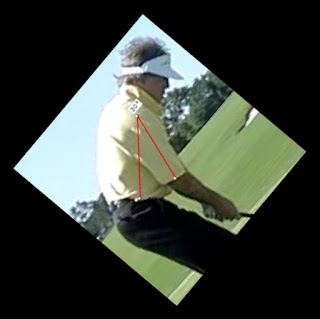 ...and, finally, we can see the scaption angle as if in the anatomical position: 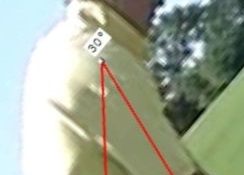 That is why it is absolutely enough to perform pure abduction movement with the rear humerus to be on the scapular plane which means elevation in the transverse plane since there is no possibility to abduct the humerus without elevating it. We do not need to worry about anything, just transfer the energy gathered by shoulder girdle trigger compression and move our rear humerus away from the body.  We wish to underline here the shoulder joints protraction element that is a must (please refer to "The Arms Situation' article on our site).
Yes, it is that simple. The turning body will take care of the rest. It is a pity that there are not many swings recorded from that angle but luckily we could find Sergio Garcia's one below; imagine how great the Scapular Angle Humerus Takeaway concept can turn to be:

Additionally, it is to be pointed out that scaption angle can be present not only during the backswing with rear humerus but also during the follow through with lead one provided the turn of the body is decent. It is another argument for those who agree to Stewart Maiden and claim that the body pivot is the most important thing, there is no other way...