Balance in the Coronal Plane. Part 1.

As already explained in the articles belonging to the SPC concept section, there are three main body planes: sagittal, transverse and coronal. The latter is very important for movements that happens from the right to left and viceversa because it sets the equilibrium between the ventral (rear) and the frontal sides of the whole body in a given moment. 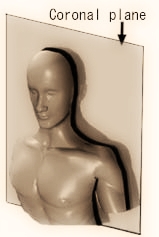 Balance in our 3-D spacial reality refers to both sagittal and coronal planes. It means we can fall down to each of the four directions N, S, W, E or their multiple combinations. Since we are bipeds with an often used possibility to enlarge our base through spreading our legs wider apart (the bigger is the surface of base the easier is to maintain in balance) it is relatively easy to achieve the goal in the W-E axis (assuming we are facing North at address).
The true balance in golf, however, is surely being set in the coronal plane though. It seems to be quite an easy task when we stand erect motionless. When playing golf we need to be at inclined plane. It means that we need to learn how to counterbalance using our body parts (e.g. the head with the tush) so that the coronal plane always bisects the center of mass area. By the way, this famous losing of tush line issue is in fact nothing more nothing less but subconscious compensations for losing the overall balance, i.e. a subconscious reaction for displacing the line astray. 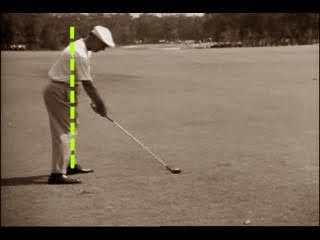 Note that the coronal plane line is set from the lead ankle joint up because this is where the vertical axis of downswing rotation (that corresponds to the impact phase) goes. Please also note that the pressure areas of both feet correspond with the coronal plane line allocation - as stressed in the diagonal stance articles - ankle joint area of the lead foot and balls area of the rear foot. Lastly, it says how important is replanting of the lead heel onto the ground for overall feel where the axis is.
Let's see how it looks further in the action: 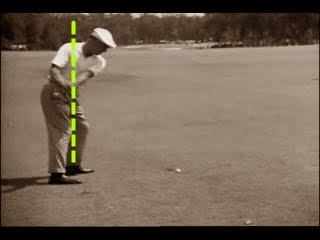 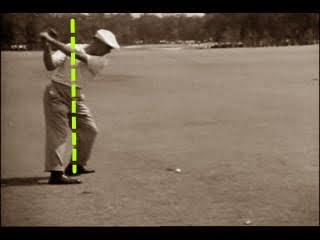 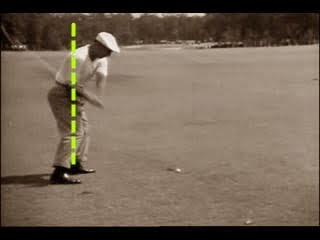 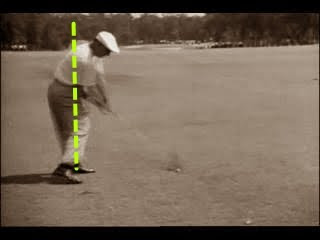 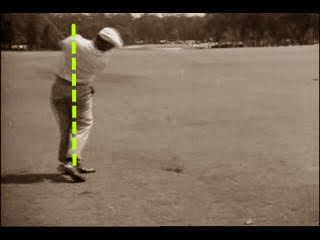 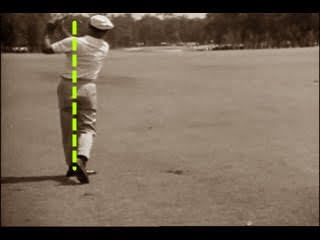 There are a lot of problems if we are off balance during the motion. Our sense of balance is disturbed and calls for compensatory moves aimed at regaining balance that usually spoil the final effect of the action. That is why our understanding of how we can benefit from merging center of body mass with the coronal plane line may be crucial. Feel and anticipate where it is during setup while placing your lead feet - watch how carefully Mr.Hogan does it in the 'Setting the Swing Motion' vid.
Posted by Dariusz J. at 15:55

One of my friends from golf fora used the notion "setup dependent swing motion". I believe this excellent definition says everything. All conscious thoughts should be used during setup routine in order to leave as less biophysical options as possible. We have already described in detail such concepts as the diagonality of the stance, building the firm rear side from the ground up, biokinetical grip, low plane angle, etc. but we have not described how a biokinetically correct setup routine should look like.

Let us discuss the most basic stuff for the beginning:

ad.1. First, we must be able to create sufficient amount of energy in order to think about efficient release; hence the necessity of optimalizing the backswing phase that have to ensure a long enough arc of the clubhead but with distal parts subdued to the main body (BTW, if our goal is to start in ReMAX LD champs - the means would be a bit different). How we can do it ?
First, by closing the feet line; putting the rear foot back to the rear vividly contributes to make the arc longer without necessity of swinging the arms above shoulder plane and losing connection with main body. Secondly, by setting the rear foot perpendicularily to the target; it will make the transition more powerful and enhance the linear part in the pelvis area via horizontally oriented forces (creating torques); thirdly, by flaring the lead foot out; it will be the best help in enhancing the rotary part of the downswing when the linear shift has been finished.
Next, the hip and knee joints must be set properly so that one could use also vertically oriented forces efficiently.
The grip should be set the way the leverages in wrists joints (the most important ones by far) could be used most effectively; hence the concept of merging lead wrist deviation with rear wrist flexion.
Lastly, waggling the club not only relaxes joints, ligaments and muscles but also helps in establishing the best grip in a very dynamical process. One should not grip the club tight before last waggle is being finished.

ad.2. The surface of feet is very small in relation to the whole body mass, especially in a dynamic motion, thus, feet must seek for wide enough stance in both planes (South-North and East-West). The bigger surface the base has the easier is to be in balance through the motion and, what is even more important, the easier is to use the ground shear forces comparing to when all body parts are in line with each other.
Secondly, knee and ankle joints movements must be utilized both ways; during the backswing, lead heel shouldn't be kept flat on the ground; lead knee shouldn't be kept stiff from bending inside in a due moment; same with rear foot that shouldn't neither be spun out nor kept on the ground approaching impact; therefore, we need to relax these jopints properly when taking our stance - even if it require replacing feet several times.
Next, the head, what is a relatively heavy organ - the weight of it amounts to ca. 7.5 % of the whole human body weight; moreover, it is the most distant part from the human body CoG (which is in navel area - for an adult man; for an adult woman - a bit lower, BTW) that makes head's motion impact on ANY CoG shift even bigger. Hence a very useful notion of the stationary end of cervical spine (not stationary head, which is a biomechanical error in thinking). Also it is worth mentioning that head should be st depending on the eyedness - but this is just a microscale issue.
Last but not least, all thre main horizontal planes, i.e. feet, hips and shoulders should never be parallel to one another. Hence the idea of increasing the diagonality of the stance in three planes - hips open in relation to feet, shoulders closed in relation to hips. Of course shoulders are used for visual aiming while feet seeks for ultimate balance and ultimate benefitting from ground forces.

ad.3. First, the firm rear side from the ground up must be build at setup thanks to the rear ankle and knee joints preset. The action contains a clockwise turn of the rear ankle and knee joints without changing the rear foot square to the target line position till the limit. Turning the rear heel outwards first (this makes the foot perpendicular to the target) and then turning out both joints. Like one wants to bring your rear heel inwards again, which won't happen because of shear forces between the foot and the ground. Since e.g. the rotational RoM of ankle joint is much smaller of that of knee joint and the latter is much smaller that this of hip joint, etc. - the sequentiality of reaction for torques is established perfectly from the ground up without leaving any other option left. The rear elbow joint may or should be preset as well so that there are limited chances for an independent from the main body movement of arms.


For the visualization purposes, we shall use again a great vid of Mr.Hogan from his Shell match against Snead here:


If we are to depict the setup in chronological points, I believe it would be like this:

1. setting the clubface perpendicularily to the intended target while visualizing it;

2. waggling the club so that the muscles, liganments and joints are relaxed as well as setting the correct position of the rear hand in relation to the lead one on the grip;

3. aiming at the target with shoulder blades while setting hips and independently lead and rear foot in their desired positions (hips a bit open in relation to shoulders, lead foot more flared out, rear foot less flared out, rear foot backed in relation to the lead one); the first motion is always done by the lead foot as the rear one takes its position in relation to it; feet are being lifted off the ground alternately; it is worth noting that lead foot is being put sequentially, from toes to heel while the rear one practically is being put on balls, leaving the heel barely touching the ground; it perfectly corresponds with feet pressure points areas;

4. waggling the club with mental image of the shot so that its trajectory and shape could be visualized;

6. putting the clubface behind the ball and starting the motion via targetwise trigger compression.

With a solid and wise setup routine no doubt it is much easier to make the motion consistent and repeatable. The serious key for automating the motion.
Posted by Dariusz J. at 20:21