Automation needs a certain repeatable rhythm as every well working machine has its own rhythm. Great ballstrikers surely had their tricks to ensure a proper rhythm of the swing motion. The great Sam Snead, the owner of arguably the most rhythmic motion, used to swing to the waltz time. In one of his books he writes:

'NOT long ago I was watching a fellow trying to slam the cover off the ball on the practice tee. "Treat the ball a little more gently" I said. I grabbed his club and demonstrated. "swing to the waltz time -- la-la-la...la-la-boom!"
"I know something about waltz time," the pupil declared. "Believe it or not, I'm a professional dancer!"
"You are? Well, stop swinging to a fast foxtrot like you've been doing, and swing to a waltz time instead!"
That tip changed his golf swing from terrible to pretty fair in five seconds.'

I, as 99,9% of golfing population though, do not possess the quality of Snead's beautiful motion; thus, the waltz time seems to be not well matched to a much more jerky swing. I have been looking to find a good music that could play a role of the rhythm for an average swing for quite a long time. It was difficult because I am a heavy metal man. However, as someone wise said once, from all modern light music styles heavy metal is the closest to classic music. Many heavy metal musicians foung inspiration in Bach, Vivaldi or Haendel. No odd that I personally like classic music as well and here is a good time to remind that the majority of my early YT vids are accompanied by great pearls composed by a genial Polish contemporary composer Mr. Zbigniew Preissner while the other are accompanied by some great classic music pearls. Recently, I have been re-discovering Georg F. Haendel and have found that one of his most recognizable pieces of music, i.e. Sarabande (from Suite in D minor, HWV 437) is perfect for my goal. 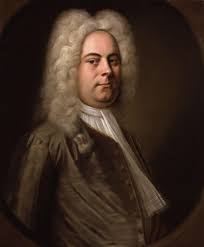 Before we will explain you why, let us present the first part of the sheet music:

As we can see, the main motive consists of two half-notes/quarter-rest/quarter-note/two half-notes. The first two half-notes should be played in our mind just after finishing the set-up phase but before the trigger compression phase. Why ? Because we are of the opinion that the rhythm must exist already before starting the motion so that it is effective. These notes give a clear indication for setting a correct tempo as well -- if the interval between these half-notes is relatively big our tempo will be slow later on and viceversa. It is a very useful thing when it comes to finding a good tempo dependently on a club or weather conditions.

The very motion starts with the trigger compression phase and the quarter-note corresponds to it. Take into account that the pause between the last of the two first half-notes and the quarter-note (the quarter-rest) must be obeyed, otherwise the rhythm will be destroyed. Also, it is a very important part since it creates the necessity to perform the trigger compression phase, which is still practically a lost art. Not coincidentally I chose Jordan Spieth as the model for today's golfers -- he obviously has not forgotten this art.
Now, between the quarter-note and the next two half-notes there is no pause which is perfect since these two half-notes symbolize backswing-transition and downswing-impact (or better said, getting into transition and impact). The quarter-note (trigger) should fluidly mix with the first of the two half notes (backswing-transition) as it is in reality. Lastly, the two half-notes are mirroring each other; it is very important to understand (and they help us to) that the time of backswing should be more or less equal to the time of the first part of the downswing (till the impact) only (and not till the finish). Hence the two half-notes are ideally put by the composer, so to speak.
Last but not least, it is a good moment to remind Tommy Armour's 'One-Two-Wait-Three' method that also matches Haendel's pattern here. Armour was of the opinion that the best and simplest tip to ensure a great timing of the swing motion is the pause at the top of the backswing -- hence the 'Wait' part that is being symbolized by the pause between two half-notes that is per se more enhanced than this between the quarter-note and the half-note (i.e. between trigger and the backswing phase).

When watching the below YT vid we encourage you to melt the notes into the motion of presented great swings: