During the idle season recently, I have discovered another very important thing. I was wrong when giving up the training -- one cannot find all things while lying in bed; one needs digging in the dirt. The great Jackie Burke Jr. said wisely once that "knowledge must progress to remain knowledge". By the way, Happy Birthday, Mr.Burke ! It happens that my wife Anna shares the same day of birth (29th January) with the 1956 Masters' winner, hence my wishes.


This discovery refers to the unexploited by me so far area of transverse plane stabilization during the motion affecting the overall balance and stabilization of the arc in the transverse plane. As we know from previous articles, one of the crucial aspects of the motion of the best ballstrikers was compression after transition with a muscular effort to use ground forces (both vertically as well as horizontally oriented) as well as possible with a very well balanced motion. The reason is obvious -- it brings partial automatism as usually when physics is being involved into human anatomy subconsciously. Great ballstrikers do not maintain the transverse plane axis stable but compress and expand in this plane which, in common words, we can describe as squatting and jumping. Vertically oriented ground forces are responsible for these changes.


The problem arises when we realize that these processes are hardly controllable since one cannot benefit neither from torques nor natural body limitations (of course apart from the phase when legs ands spine are totally extended till the limit at the end of the jumping action). Knee flexion amount cannot be preset at setup either, instead it is choosen and goes subconsciously arbitrarily till the end of the motion. People struggle not only with setting a good posture but also with timing of transverse plane axis changes -- some people e.g. relieve the  knee flexion (in a subconscious attempt of  power the motion) too early or too late.  Same with releasing the spine flexions, but this is I guess of secondary importance because it relies on what happens below when we believe in a motion built from the  ground up. In order to solve some mysteries and help to automate the motion also in this area we need first to look into the most important of all sciences in biomechanics, i.e. into the human anatomy.


The area responsible for squatting is being enframed in the subpelvic part of the body. Let us concentrate, however, on the region below knees. Human shin, in the hard structure, consist of two bones (tibia and fibula) -- opposite to many four-legged animals that have only one bone in the shin. The difference lies in the range of motion required for every possible useful movement. A man needs more possibilities since he is a two-legged creature that relies a lot on shear forces and horizontally oriented ground forces. It is important to know now that the stronger bone, tibia, is almost entirely destinated for servicing the vertically oriented forces (i.e. "animal " bone) while tibula is a complimentary bone allowing for putting horizontally oriented motions into use. Of course a full explanation would require talking a lot on muscular and ligamental system that is not necessary on our level as for now. 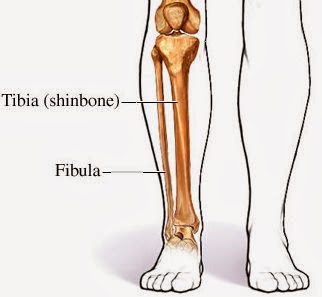 Reverting to the main topic of the article -- the idea is not to let the tibia action dominate everything in the golf swing motion because otherwise we will be totally dependent on timing. If the base for both bones that is being used in contacting the ground was relatively small and located around the bones ending only, not much could be done. Luckily, the base has a form of our feet that are much more versatile instrument. Leonardo da Vinci described human feet as a miracle of nature, precisely "a masterpiece of engineering and a work of art". Human feet act as tripods with three arches helping to absorb shocks, move and keeping the body mass in balance in dynamic actions. 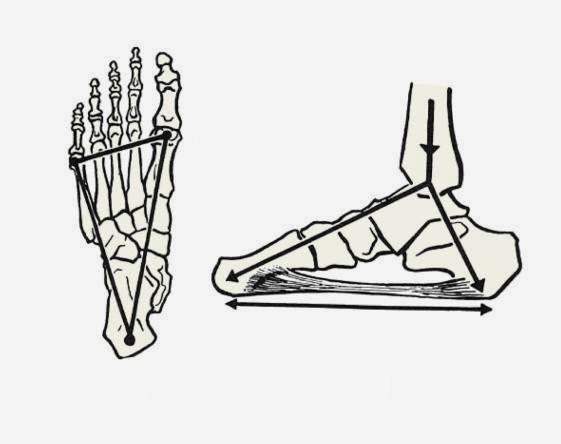 In a golf swing motion, where the weight goes from side to side and not from back to forth (like in walking or running), two crucial areas are medial arch and lateral arch. Not coincidentally the first one corresponds to tibia and the latter to fibula. As we can easily observe, the first three toes and especially the big toe (Roman legionnaires are being told to cut off big toes of prisonners so that they could not escape), serve for tibia oriented "animal" jumping procedure in that the biggest medial arch acts like a spring, while the last two toes activates tibular regions and act as a balancing part. 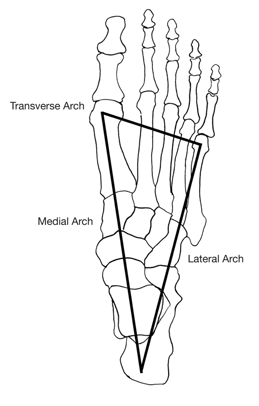 One of the finest ballstrikers that have ever lived, George Knudson, says in his book that it took him a year and half to find a recipee for such a well-balanced motion as the very Ben Hogan had. Thanks to these articles you will need no more than five minutes to check if you need help in this area and to make necessary changes that will help in case you need it. Opposite to the vast majority of today's totally ineffective golf swing instruction, Knudson was aware of the fact that it is the legs that carry the arms and hands. He admired Hogan being so stable over the ball and throughout the entire motion despite he gave it everything he had -- as Knudson wrote in the book. Now, I cannot promise my discovery is identical to Knudson's (but I am pretty sure it is at least similar) yet I can guarantee that the required effect is identical. Mr. George wouldn't have wasted so much time in case he had studied medicine and physics, especially this of human feet.