Let us proceed to describe how to automate the set-up phase so that it matches to the slap-hinge release type. In the part 2. we underlined that it is crucial to stand as close to the ball as possible and  to perform correctly the primary spine side tilt.

We shall start with a normal set-up procedure of the diagonal stance, however, with less lead foot flare and more rear foot flare angles (in order to help pivoting body in the backswing phase and obtain deeper backswing and also to force the lead side be firm a tad earlier) but still with rear knee joint preset that accompanies the SPC concept swing. The look is a bit less closed because of changing of the angle of both foot flares, nevertheless, the stance still has its diagonality. 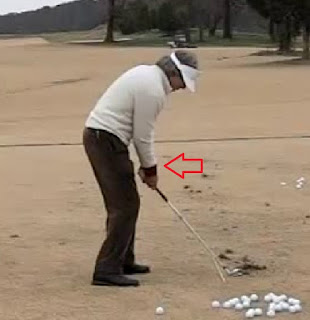 The handle should be moved more targetwise, almost at impact fix position or between impact fix and mid-body hands at setup because of extra primary side tilt at address. Hands should be as close as possible to te body with arms both flexed in elbows. The antithetic waggle that helps vividly in obtaining primary axis tilt and setting the weight a bit onto the lead side also help with bringing handle forward to the point the lead arm is straight; then lowering the handle while bringing the lead shoulder into depression stamps the process and makes knees bend the proper amount. 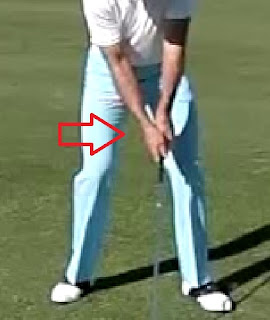 Primary spine tilt should be obtained in the thoracic part of the spine so that the sholulders were not unnaturally slanted. It means that a slight modification is necessary in relation to the procedure described in the Arms Situation episode. The lead shoulder is in depression, but the rear one in elevation. Both shoulders of course are in protraction. Primary spine tilt is, therefore, mainly in thoracic part of the spine. The head should be slightly bent laterally antitargetwise.

The start of the entire motion happens through the trigger compression, however, since this kind of motion is more upper torso oriented, the trigger moves the upper torso to begin the upswing in a circular manner forward and helps to use gained inertia to perform the fanning rear humerus takeaway at the scaption angle (we shall revert to it in detail in the next article). The backswing subdues entirely to the SPC concept, the transition phase as well, hips act totally automatically (we do not think about them at all), then we use upper torso rotational power in a slightly slanted way because of the secondary axis tilt obtanined by hip slide and, finally, pouring rear hand power. The elbow plane is being achieved a bit later than in a classic EEP procedure for obvious reasons. The angles should be preserved till the end of the upper torso powering stage. 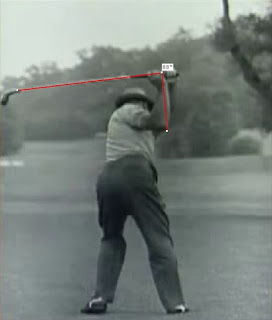 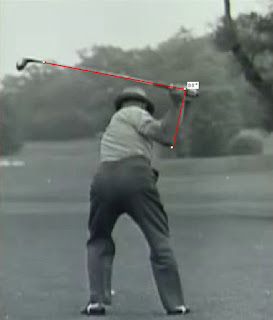 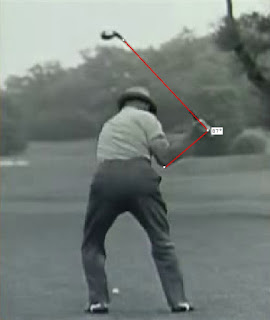 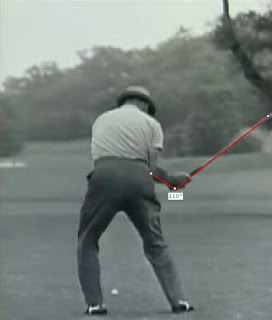 Last but not least, there is a good visual in the famous old Mr.Hogan's beach video when the master poses in slow motion -- not thinking about hip action neither slide nor turn at all and both shoulder power and pouring rear hand stages are underlined !

Tommy Armour described how easy it might be: "[...] by becoming acutely conscious of the necessity of a right-hand whip when the club is getting close to the ball, you will be pleasantly surprised at how your shoulders, hips and footwork are naturally disposed to co-ordinate with the hand action".


We recommend this type of swing to older and body-handicapped golfers as well as beginners who cannot sacrifice as many hours as they want for training and are prone to hit hard with their rear dominant arms: