Gaining the Setup Automatism in the Controlled Draw Pattern. Finally a Bliss for RED Golfers.


The beauty in the Controlled Draw Pattern is that it can be finally a bliss for RED (Rear Eye Dominant) golfers -- yes, almost all things in golf favour either ambidextrous or LED (Lead Eye Dominant) players. Why ? Because golf is a side sport and the target is located at the lead side. For the first time we were lucky enough to invent a procedure that is extremely easy for RED majority of golfers, but first of all, introduces almost full automatism to the setup  procedure and, therefore, makes the Controlled Draw Pattern in the Senior Swing almost fully setup dependent motion.

As we already know, two very important features must be obtained before the swing motion begins -- increased spine tilt and closed shoulders line in relation to the target line. We can have both in the same time when creating it becomes second nature, but let us examine them step by step. Please take a serious look at the following diagrams and descriptions:

we need to stand neutral in relation to the target while placing the ball exactly below the rear eye, then close the shoulder line and the whole torso in relation to the target line; we observe that by doing that the relation between the ball position and our eyes changes to a more centered one between the rear and the lead eye; we mentioned earlier also a valid hint for RED golfers who would like to depend the amount of shoulder girdle closure -- just try to look at the target binocularily "through your nose" with your rear eye

when we increase axis tilt more than the primarily achieved because of lower position of the rear hand on the grip the relation between the ball position and our eyes changes to almost under-the-lead-eye one; this is the position from which we start the motion; remember to use a more linear trigger in this case

As mentioned, both phases can be executed simultaneously and, moreover, we can easily learn to match the procedure to the club length and projected action ad hoc. When we need the flat spot to begin earlier (as e.g. in case of driver shots) the axis should be more increased, even to the position of the lead eye behind the ball. Conversely, when we need the flat spot to begin later (as e.g. in case of punch shots) the axis should remain as in the closed shoulders phase.
A very good idea is just trying to look what is below the ball's equator with the lead eye before the trigger compression phase while not letting lose this below-equator view with binocular vision after the body downswing shift until impact. Interestingly, the ball position in the downswing phase after the Horizontal Guillotine Effect practically returns to the rear eye over the ball while having the lead side wide and the rear side narrow (as explained in the last article), however in terms of binocular vision we can still see the dimples below equator till the end, i.e. losing the ball image which happens to all of us in various phases of the late downswing.


Last but not least, some nuances referring to the set-up procedure in the Controlled Draw Pattern.


First, it is worth mentioning that we are in a position to proceed the combined closed shoulders and increased tilt phases from the ground up using the old but gold procedure of presetting of the rear leg ankle and knee joints (please refer to the 'Setting the Swing Motion' article from the year 2010) aiming at anchoring our feet well and, therefore, at easing the WAB into SWAB phenomenon (please refer to the 'Solutions to Lengthen the Flat Spot. Part 3. Controlling Up and Down Movements: the Spine' article).
Both legs can be subdued to preset if it helps to anyone but, of course, the most important is the rear leg and its joints. The difference is that we now need to care about the senior and less agile golfers who tend to have weaker legs and, therefore, we need to create more effective shear forces, the more we do need as less flexed legs in the knees as possible (because of desirable limitations in the horizontal plane).
Take a look at the view from the above onto the rear foot -- while presetting the knee and ankle joints it is of crucial importance to open it slightly then raise the toes and rotate them to the outside creating the very firm outside border of the rear foot.

Secondly, it is crucial to control the lead side firmness (please refer to the 'Firm Lead Side in the Impact Zone' both articles) which might be easily done via the lead hip fixed extension procedure. The bigger the fixed extension is the tendency to excessive draws is limited and viceversa, without so firm the lead side it is much easier to turn in the impact zone and add some to the draw numbers. We would personally firm up the lead side for small push draws that tend to end at the right of the target while loosing it a bit for draws that end to the left of the target. An advanced player would also use it for programming the height of the ball flight as well as merge the amount of firmness with the length of the clubs.

The Controlled Draw Pattern in the Senior Swing. The Horizontal Guillotine Effect.


The Senior Swing Concept, as we have already know is being based on simplicity of movements that is so much required by seniors and body-handicapped golfers. There is no such a strong pivot present in the swing and less depth is prevailing. The whole motion is, therefore, more linear and shallow by default. Despite this we are capable to make the swing also automatic to a degree with help of some features described in detail in the Senior Swing series of articles including the YouTube educational video.
Unfortunately, a very negative consequence occurs -- namely, vanishing power and, thus, vanishing distance of hits which is very painful for less agile and older golfers.

Gardner Dickinson, one of the most famous Ben Hogan disciples, says in his great book titled 'Let'er Rip!': Never have I seen anyone control the ball as Hogan did during that period; it was beautiful to watch. A decent putter playing as he did from tee to green would have scored in the 50s almost every day [...]. One day he shot 61 and the longest putt he had for birdie, or eagle, was five feet. He could place his drives almost anywhere he chose [...]. The swing that produced Hogan's characteristic fade was developed when he was close to forty, and it continued into his mid-sixties. Slicing the ball as he did cost Ben a lot of yardage, and eventually he went back to drawing his shots. I asked him one day whether, if he had been able to control the draw, he would have played with a slice, and the answer was a firm "No".

The moral of the above story is very clear -- if only Hogan had been able to automate his pattern for draw the way he did it with the fade one -- he would have played draws as he would have gained some important extra distance for his shots. But he was not able to automate it the amount he wanted. Noone was able, let us be frank. Yet, when aging, Mr. Hogan decided to revert to draws as, which seems so symptomatic and sad in one, distance became more important for him than almost total automatism, repeatability and consistency of his fade swing. Honestly, I am 55 now and although I am not very short for my age and my imperfect body I noticed clearly my distances have shrunk considerably recently, especially after converting to my senior swing pattern.

The beautiful coincidence is that it is relatively very easy to control small push draws in the very pattern without any further timing-dependent modifications. We would even say that draws match the pattern better than fades (or at least almost straight delicate pushes). Moreover, we should not be afraid of hitting the ball fat (so typical with the desire to draw the ball) since obtaining a long flat spot even before the ball is not a mystery any more for us. As we know we need closed shoulders and increased spine tilt already at setup and then a limited pivot with depressed rear shoulder and then a linear trigger compression phase. We do not need to change anything after that, just to follow the trigger and swing on the outside-to-outside basis (please refer to the 'Bow Tie Concept' article).

The above diagramme shows from bird view the so-called Horizontal Guillotine Effect that is being required in simplification during the first part of the downswing from the top of the swing (left) up to entering the impact zone (right). The linear motion of the whole body (not only hips like in the Stack&Tilt pattern) is very easy, especially for RED golfers (this is another great feature as these golfers are in vast majority), and can happen without jeopardizing anything because of the increased axis tilt preset at address in the Senior Swing pattern that does not change during the motion. It is virtually impossible to enter the hitting area from the outside taking into account shifting this wedge-shaped body correctly and simultaneously knowing that we should not hit with anything below elbows since these body parts are for us the parts of the club system (please refer to the Automatic Shallowing via Sweetspot article).

Now please look at this diagramme below: 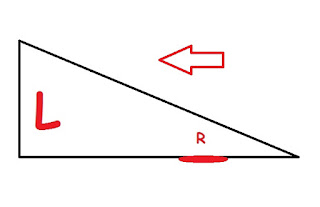 If we enter the hitting area with such a wedge, so to speak, our lead side appears to be much "wider" than the rear one in the coronal plane which is great as it prevents from throwing the rear side to the outside. This "width" is also present because of our lead humerus sticking out in front of the torso (while the rear humerus stays rather behind the torso). We only cannot let the rear "thin" side to "widen" prematurely, as this leads to numerous problems with the execution of the swing. The best feeling that accompanies this idea is not only to try to hit with humera close to the body but also to "hit with the rear scapula". It is also very interesting for all rear side dominant players that, again, are in the vast majority. Powerful, yet still effortless, shots from the inside are the desirable results.


P.S. There are no pure examples of the Horizontal Guillotine Effect in tour swings of course, however, some great swings (especially of greats in their older days) show the linear motion of their shoulder girdle together with their head after transition; while looking at the below gifs simply imagine less rotation aiming at delivering closed shoulders line to the hitting area (without concentrating on head dips):