Here is the continuation of the series of the Forgotten Great Swings that shows my personal choice of biokinetically sound forgotten, almost forgotten or unknown today motions that are worth learning from. The most important values are mentioned in the content of each vid. It is really unbelievable how biokinetically efficient these swings were - mainly because they contain a lot of subconscious friendly parts in their kinetic chain of events...


The series of the Forgotten Great Swings shows my personal choice of biokinetically sound forgotten, almost forgotten or unknown today motions that are worth learning from. The most important values are mentioned in the content of each vid. It is really unbelievable how biokinetically efficient these swings were - mainly because they contain a lot of subconscious friendly parts in their kinetic chain of events...

A connotation of the over the top (OTT) move when starting the downswing phase is very bad. Golf instructors try over dead bodies to eliminate it from the swing motion. Some of them claim that OTT is the main reason why people slice the ball badly. Of course, in the times of Trackman, when we all know what is responsible for what, the above sentence makes no sense, however, the bad connotation remains. Too bad that golf instruction does not a step further in biophysics...


The truth is that ball lies on the ground in front of us. It requires hitting not only out but also down at the ball with a clubhead positioned up and inside at the backswing end. If we assume that the best biokinetically sound downswing plane is low (elbow plane) and that golfers achieve this plane as early as possible (EEP) there is no possibility of not having an OTT element in the motion. Swings of best players and ballstrikers starting from Bobby Jones through Ben Hogan, Jimmy Demaret and Sam Snead to George Knudson and Moe Norman had it for sure. Their downswing planes were above their backswing planes, however, their shafts, clubheads and sweetspots shallowed forming a great elbow plane downswing. Hands were OTT while sweetspots were approaching still from inside ensuring both power as well as great path-clubface angle relationship.
Of course, such a scenario is possible only if the downswing plane is low enough (elbow plane). That is one of a few reasons why the EP is biokinetically soundest plane when talking about repeatability and accuracy - much better than the shoulder plane (TSP) which requires rather reverting natural OTT tendency and shallowing hands plane through the downswing, therefore, just bringing a whole bunch of timing issues into the motion as well as not feeding our subconscious minds with essence of using maximum power.


We cannot underestimate the power element. Not coincidentally, when trying to hit hard an object lying on the ground we use OTT move. Our subconscious minds know very well that cooperating with gravity is an important piece of puzzle - hence so many beginners are over-the-toppers. Unfortunately, OTT can be a deadly thing when not adapted correctly into the motion since it may lead to an outside-to-in cut across the ball. Thus, it is crucial to take necessary measures, best of course at setup, that ensure hitting the ball with a powerful OTT move while still being able to deliver the sweetspot from the inside.

That is why the role of such elements as diagonal stance, biokinetical grip or sequentiality of the motion from the ground up cannot be overestimated. They mechanically promote shallowing the shaft despite the hands downswing plane goes over their backswing plane and, therefore, help to create proper conditions. Golfers should never be prescribed endless repetitions and drills that are against their subconscious minds but, instead, informed how to adapt correctly these elements. It is really hard to believe that golf instruction has not found this way so far and often offers advices that completely neglect elements that are somehow naturally imposed by subconscious minds of golfers.


It is worth mentioning here that over the top move is not the only one "subconscious-mind-friendly" natural move improperly cursed by today's golf instruction. Another big example is the slap-hinge release type that probably have even worse connotation today. Today's golf instruction curses everything that equals to losing the rear wrist angles before the follow through phase calling it erroneously as flip. The truth is that flipping is an error which makes a golfer release his angles completely too soon before contact while the slap-hinge release delivers the angles to the impact zone and lets the wrists release naturally after contact. 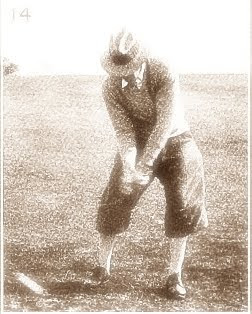 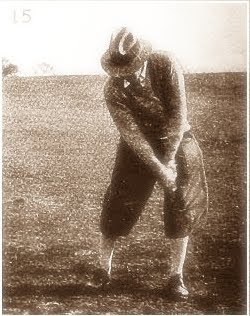 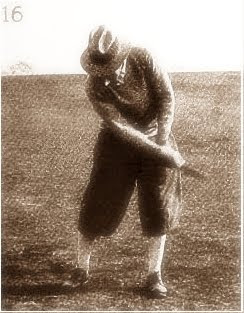 Too bad that we very seldom remember such great players as Wild Bill Mehlhorn (whom the very Ben Hogan called as the best he ever saw from tee to green - see above & below) or such great golf swing theorists (and, simultaneously, superb players) as Sir Henry Cotton, who differentiated the three release types having the slap-hinge release as one of the three. Many could learn a lot from them today, believe me.
Nota bene what Hogan developed after 'the secret' is a release that is somehow between the push and the slap-hinge one, i.e. merging stability of the push release until impact and subconscious-friendly release of wrist angles after impact. It allowed Hogan to leave fears of handle dragging what accompanied him before 'the secret' and could be easily observed as well as not returning to dreaded crossover release that plagued him in his early stage of his carreer. 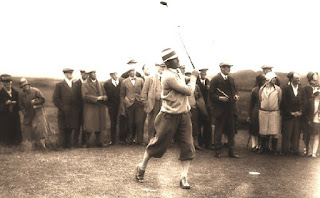 Hogan was very serious when it comes to waggling the club before giving it a go. He even called waggling a bridge between the address and the beginning of the whole motion. He was perfectly aware of quite a few important reasons to include it into the pre-shot routine. Working out the feeling for the clubhead, warming muscles, mental preview of a shot, adjusting the correct tempo, sensation of a movement are just them listed in a random order. 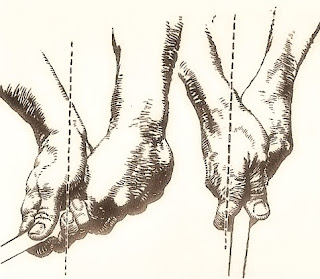 Hogan sacrificed a lot of verses to the waggle phenomenon in his book that every golfer should read carefully. I was struck especially by these brief sentences:
"When a good golfer is going through his waggle, to the uninitiated eye it sometimes looks as if he were simply getting the fidgets out of his system or finding a surer foothold with his spikes. He is, as I have described, doing something far more purposeful than that. He’s adjusting to the shot, establishing his coordination in the process. He is, in effect, conducting an instinctive roll call of the parts of the body he will be using, alerting them and refreshing their memory of the movements they’ll be making during the swing."

Unfortunately, he did not say everything...

I called the waggle Hogan used "the antithetic waggle". The word 'antithetic' means 'in diametrical opposition' which describe perfectly what is going on with the body. When one waggles the club back one should move the legs and hips into the opposite direction, like one wants to maintain symmetry in the sagittal plane. Moreover, the swing of the upper torso would cause the lower body to turn in the opposite direction in a free environment on the basis of the Newtonian action-reaction rule. It is our feet and their connection to the ground with gravity and shear forces help to hide this inevitable action (see: Chris Como's jumping to the pool experiment). Anththetic waggle is just a very natural preparation for the swing motion.

Hogan said that the rear hip should even touch the rear elbow. And it can be done the easiest way if both arms and hips are moving in opposite directions on an arc. Such a combination makes it almost natural to achieve properly the diagonality of the stance that is so useful and important. It naturally accompanies the rear foot being set perpendicularily to the target as well as prevents also naturally the shoulders from opening simultaneously when hips open in relation to feet (as we know shoulders should remain closed in relation to hips and more or less parallel to the target).It is worth mentioning here that rear eye dominant golfers (RED golfers) can and should use the antithetic waggle to set the dominant eye just behind the ball even if it causes a slight diminishing of the primary axis tilt (provided the whole issue is offset by the ball position moved enough back). 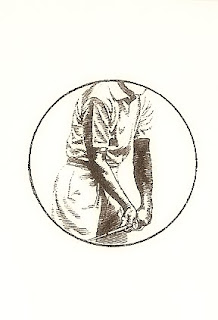 The very Hogan underlined that shoulders cannot move during waggling and, of course, he was right as usually since one should not move what one uses for a correct dynamic alignment towards the target. One uses neither hips nor feet for this goal though, thus, there is no reason they should not be moving if waggling are to be treated as Hogan wanted, as preparation for the shot. Lastly, it should be stressed that this antithetic way of waggling prepares the body excellently for starting the motion with the initial trigger compression phase that we regard as optimal biomotoric scenario for starting the swing. Sort of pre-trigger adaptation for an optimal body motion starting with optimal diagonality of various body parts in relation to one another.


Observe how Hogan's hips move targetwise while his clubhead goes in the opposite direction:

One of these little things that matter...