Balance in the Coronal Plane. Part 2.

Considering the fact golfer is forced to have a bent posture, proper counterbalancing in the coronal plane is crucial. The most difficult a task is to countebalance human head that is not only a relatively heavy and big organ but also it has quite not small range of motions independent on main body movement. The fact that our receptors like cerebellum, eyes or (inner) ears are located there does not ease the task at all.

In order to ensure the best scenario for maintaining the coronal plane balance we need to take into account such subconscious-friendly measures as diagonal stance. However, we can go one step further in making the whole issue even easier - we must find the way the head moves simultaneously with the rest of the body and get rid of any independent movements that would make impossible to react to couterbalance in such rapid a motion as golf swing is. We all know a famous false myth of stationary head. Golfers trying to achieve it make a lot of goofy efforts making it impossible to let the head move naturally.

Nature brings best solutions, as usually. Head is linked to the rest of the body via cervical part of the spine that is being characterized by a relatively large movability that, in consequence, ensures head movements, such as flexion, extension, lateral bend or rotation.

The most natural and physic-friendly position (because of gravity) of the golfer's head is forward bending, i.e. cervical spine in flexion. Not coincidentally, it is also the best natural position of the head to work together with the rest of the body completelly naturally on the subconscious mind level. Of course we talk about a not forced flexion. 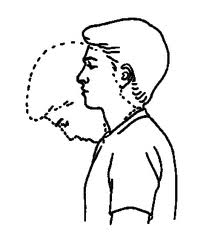 When watching the best ballstrikers in the history of golf hitting shots we seldom or even never pay attention to such details as cervical spine position. The truth is that some of these are very crucial for a much larger issue as e.g. overall balance. In this context, the second part of this vid is worth paying special attention to.