The Senior Swing. Part 2. A Short but Enlightening Story.


The tabula rasa starts with steering the clubhead alongside the baseline (let us believe it is aimed flawlessly straight at the target) and, simultaneously, he/she wants to scoop the ball because it does not trust in clubs' lofts yet. The result is obvious -- he/she hits long before the ball. Phil Rodgers writes: "A slicer has little or no flat spot, and a hooker's flat spot is too far behid the ball". Thus, the brain thinks how to avoid it and concludes that hitting from the outside across the ball is a cure. The brain accepts this easily, it is easy to hit the ball this way because it lies on the ground. Moreover, everyone says that one should hit the small ball before the big one (our Earth). However, a new problem arises -- the ball does not want to go straight at the target, it goes well left of the target. Until now, the brain associated the direction of the ball with downswing path direction with the clubface square to the path (hence, by the way, the so-called old ball flight laws were so long en vogue and millions of golfers including the greats built the whole game around them). Now it becomes obvious that toying with the clubface angle and delivering an open clubface to the path results in making the ball start more to the right and it also seems to curve even more right to the target. The vicious circle running...

The conclusion is -- the golf instruction for newbies should concentrate on automating the process of finding the best way to let new golfers hit it fat from inside without hitting it fat. IT MIGHT BE THE MOST IMPORTANT GOLF SWING TRUTH EVER WRITTEN FOR ALL GOLFERS. Both Rodgers and Nicklaus thought about the same idea as well but rather in the context of helping accomplished golfers to work out consistent swing without lots of timing issues and verbalized it not so explicite. Coincidentally or not, this is also our current universal goal with working on the Senior Swing principles, for both accomplished ones as well as weekend hackers. Stay tuned, we shall try to work out the method of automating the process of obtaining long flat spot. 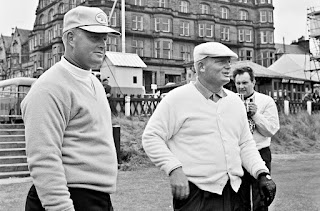 P.S. More specific and  realistic graphics of the Flat Spot in our golf forum.

The Senior Swing. Part 1. The Introduction.


We have already decided that the senior swing (i.e. the motion for older and body-handicapped golfers) should be based on the slap-hinge release type for the reasons that has been already explained. It is also well known that this release type, although the most natural from all three, is also somehow timing-dependent in the sphere of a consistent and repeatable finding of the low point of the swing arc. There are two great concepts created by two great minds that will help us to search for the answers that are going to solve that problem.

The first one has been mentioned by arguably the best player of all times. The late Jack Nicklaus thought that the ideal swing plane is vertical (perpendicular to the ground) because clubhead is always on the baseline and, therefore, all shots would be perfectly straight. "The ideal way to play golf would be to swing the club in a vertical plane -- like a pendulum. That way your club would never deviate from your target line, and, assuming you could also devise a way the clubface square to the target, you'd be bound to hit every shot straight". Of course this is only half of the truth because: a. it is not physically possible to swing that way for a human and b. he was right only in one dimension (the ideal swing plane from the other dimension is horizontal (as in baseball swing) because clubhead is all the time on the ball level -- but it would merely touch the baseline for a very short one moment in time (not mentioning it is also not physically possible). In such situations usually the best equillibrium from the geometric point of reasoning is to have the swing path on a 45 degree angle. 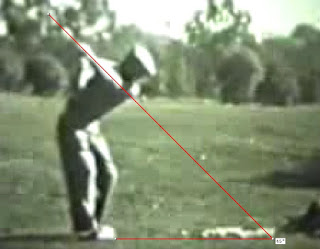 Moreover, it is also important to support the shaft with the rear forearm acting on the same plane as the shaft for as long as possible before and after the contact (hence the early elbow plane in a pivot-subdued swing motion). Not coincidentally, the EEP angle is also very close to 45 degree and perpendicular to the turning core: 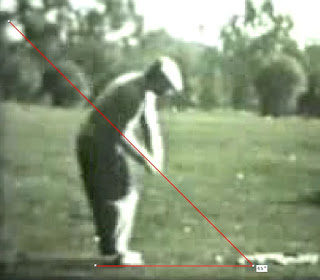 Late Nicklaus's more vertical swing arc angle calls for something different though. As the vast majority of senior and body handicapped golfers cannot have a decent quality pivots (usually the biggest problems are associated with lack of depth in the body turn) it become obvious that the angle of the path must increase which calls urgently for some rescue adjustments in the swing. In TGM terms the elbow plane is being replaced by the turned shoulder plane and the rear forearm does not support the shaft being parallelly behind it approaching impact zone. 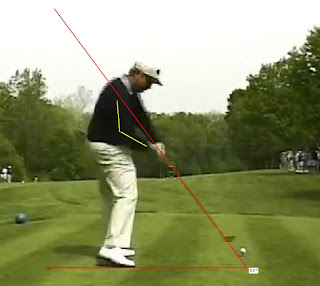 What is to be pointed out here the slap-hinge release also needs the same adjustments aimed at consistent and repeatable finding of the low point of the swing arc. Nicklaus claimed very wisely that the rescue is to wide the swing arc as long as possible in the sagittal plane. "An upright plane gives the golfer his best chance of swinging the club along the target line at impact. However, uprightness of plane must be accompanied by width of arc [...]." 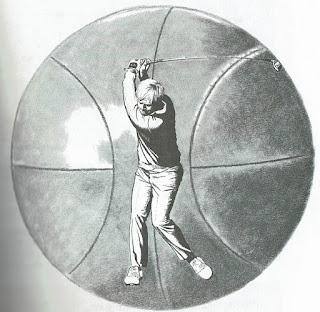 It is perhaps enough to provide the motion with necessary clubhead speed, however, it is not enough to solve the problem of timing issues while finding low point. The correct answer is to make the bottom of the swing arc as flat as possible for as long as possible. We are now passing fluently to the second of the two great concepts -- this one was invented by famous player and theorist Phil Rodgers and called the flat spot. Let us quote the great man himself: "I want the club moving parallel, or level, with the ground when it strikes the ball, and continuing level for some five or six inches afterward. The parallel zone [...] is the flat spot".

Rodgers argues wisely some advantages of the flat spot such as less resistance to the clubhead than in case of hitting down at the ball, clubhead moving more quickly in the impact zone, reducing shock to the hands or providing greater compression of the ball on the clubface. While he may be very right with all of them the biggest advantage of long flat spot is eliminating of timing issues that accompany the process of finding low point in the arc, which means the remedy we are looking for for the senior swing.