First, we must be aware that properly executed slap-hinge release is not equal to a faulty scooping action when the hands are being left behind the ball. They are correctly positioned ahead of the ball just like in any of great push release shots. Great Tommy Armour explained it as follows: "If you'll pause to consider, you will realize that if your hands are behind the ball at impact, you can only scoop the ball up. But if your hands are in front, you've got to smash the ball with lightning speed". The difference between slap-hinge and push release lies in wrist action in accordance with a very simple rule -- the more hand action the less is the ability to hold angles in the natural way. Moreover, the angular velocity of body pivot is not that high any more, thus, some wrist action must simply happen before the swivel of forearms happens naturally in the follow through phase. That is why, despite the opinion of some bad instruction of today, it is nothing wrong in the lead wrist slight dorsal flexion (and the rear hand palmar flexion) after the ball has been hit. This is famous Wild Bill Mehlhorn (whom very Ben Hogan regarded as the best tee-to-green player he ever saw) and his impact action in a pure slap-hinge manner:

We can also observe this kind of action in other greats of yesteryear such as Harry Vardon or Bob Jones (interesingly the latter uses the slap-hinge release from sand (!) which somehow disqualifies arguments about problems with finding low point correctly consistently):

Since slap-hinge release is being based on the rear hand boost and the lead hand dorsal response to it  the ball trajectory is prone to be a pull, especially when body pivot is weaker but still correctly executed from the ground up and core out as per SPC Concept. My own case confirmed it easily. Therefore, we need to be more careful about full implementing the subconscious-friendly OTT move that characterized so many great ballstrikers. We need now to turbo the impact conditions with rear hand action without worrying about ball going left as well as without holding angles post-impact. See this beautiful drawing from the best book of Sam Snead which shows how he imagine pouring the  rear hand power into the ball: 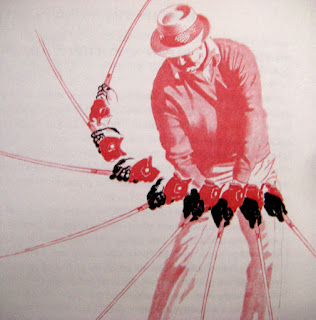 It is worth mentioning here that Henry Cotton, whom we quoted in the part 1., was convinced that the rear hand, starting from a certain point in the late downswing, moves faster than the lead one and the proof was an extra blurriness on the photo (see: Forgotten Great Theorists series and the Henry Cotton episode).

In view of all the above, it is absolutely required to take into account the following measures:
- to stand as close to the ball as possible (it promotes downswing inside approach);
- to perform correctly spine side tilts, both primary and secondary (it also promotes downswing inside approach).
We shall tell how the above can be easily automated during setup in the part 3.

Lastly, in case of not so effective body pivots, often the clubface can be left open at impact resulting in push shots, especially with longer clubs. We are of the opinion that it is better to train how to pivot correctly, but we are aware that age and illness can spoil such plans. Dumb instruction, in such cases, promotes crossover (roll) release, the worst of all three release types because of disastrous timing issues. The truth is, however, that we can adapt slap-hinge release here easily as well but with the following simple add-ons:
- grip harder with your rear hand, especially by three first fingers (it promotes late but sure closing of the face, Johnny Miller used this thought while wanting to play a draw);
- wind the rear forearm in a pronating manner up to the target in the Abe Mitchell's style;
- if someone is a feel player, Jackie Burke says about concentrating on accelerating the clubhead, not the whole arm, as a soultion for a too open clubface at impact.