Firm Lead Side in the Impact Zone. Part 2.


The great Jack Nicklaus wrote this in his book "Golf My Way" about firming up the left side: "The right side must stay 'under' the left side through impact. For it to do so, the left side must provide resistance: it must be firm, extended, resillient. I achieve this left-side resistance through a feeling of stretching from my left foot to the tip of my left shoulder -- without, let me add, straightening my left knee. Keeping the weight on the inside of the left foot  through impact is also fine insurance against collapsing the left side."
This is a perfect description of what was discussed in the first part of the article and not bad an attempt of explaining a decent scenario of the parametric acceleration phenomenon to happen. One correction should be made in the quote -- namely, Nicklaus had to straighten his lead leg (which is very visible), however, never straightened it fully before and at impact.

Another hall of fame ballstriker, George Knudson, described in his book that he strived for achieving undisputed balance on a flat lead foot after impact just as his model, Ben Hogan, had been able to do. He wanted to find a way that the swing motion would stop in the right moment -- not too early, not too late. Something that set up the resistance in the left knee and hip. Unfortunately, he did not explain it clearly how he achieved this. We can only speculate watching his swings: it is evident that his lead side sort of changes horizontal around body movement into a vertical extension one; it is also more than evident that he did not try to benefit from any torque in his knee joint.

It is a rare thing to observe a great ballstriker from front angle and, moreover, in shorts. One of the best swing motions ever, in my opinion. The famous Mac O'Grady footage that can be found in the net shows much clearer the phenomena described in the Knudson's case above -- horizontal into vertical or flexion into extension without a premature losing of inward position of the femur and hip joint.

Now, what I concluded from all of this -- first of all we cannot use a similar procedure of presetting the joints (ankle and knee ones) from the ground up as in case of the rear side because our goal is not to make a wall aimed at reversing the orientation of the body movement.
Therefore, we need to build firmness of the lead side without forcing any of the body parts to stop on purpose.
The best results are being obtained with presetting at address the lead hip joint the way it is turned inward and drawn back a bit. In medical terms it is a combination of slight internal rotation and fixed extension of the lead hip (fixed extension means with both feet on the ground using both horizontally and vertically oriented ground forces). Compared to the firm rear side with the rear leg ankle and knee joints' presets the firm lead side requires presetting only the hip joint. The fixed extension has also a good impact on the knee joint that remains firm throughout the whole motion. Remember that the lead knee should not be loose in any sense otherwise it brings a strong element of instability to the whole lead side. 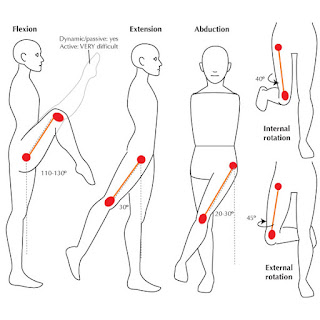 The best thing is that this kind of presetting the hip joint is utterly compatibile with both the concept of the Diagonal Stance (where the lead hip is in slightly more open position while lead foot in a closed one in relation to the hip) as well as with the concept of the Antithetic Waggle (where the presetting of the hip via inward rotation and slight extension happens almost naturally while the hip moves in opposite direction to the hands and the club). Pay special attention to this, please. Also, I have noticed that one of the few viable methods of positive influencing via toes' action -- namely, curling lead foot big toe at setup (that originates in one of Steve Elkington's advices) is very helpful in maintaining the firm lead side in the impact zone.

Last but not least, a small but useful remark: the firm rear side that is being build from the ground up to sequence the transition cannot be prematurely active. It cannot "collapse", especially in the hip/femur area. The rear side, having passed the momentum to the leading lead one, needs to be dragged while exerting the vertically oriented ground reaction forces there, i.e. preserve some sort of resistance after transition until it turbo the lead side with its own gained momentum later on. The famous squat that happens after transition is, by the way, one of major derivatives of this phenomenon.