The Senior Swing. Part 3. Mr.Rodgers's Argumentation about the Flat Spot.


Before we proceed to reveal our findings it would be unfair if we omit the original argumentation of the concept inventor, Phil Rodgers. Although the flat spot topic in fact does not take much space in the 'Play Lower Handicap Golf' book, there is another source. We have invested some time and money in finding and purchasing one for the old Golf Digest magazines with a detailed and heavily illustrated article about the flat spot idea (we use here scanned photos from this article) in which the author explains how to manufacture a long flat spot we all should desire to have. Let us present below the summary.

First of all, Rodgers recommends swinging level, not down. 'Think of hitting the ball in the back rather than striking down on it. The idea is to lengthen your flat spot, where the clubhead is moving parallel to the ground. You want to contact the ball at the start of the flat spot with your irons and the middle of the flat spot with your woods'.
We totally agree to the above knowing how disastrous hitting down on the ball can be when not being able to deliver the clubhead from the inside. Thinking about hitting in the back of the ball is great unless we learn how to avoid hitting the ground inches before the ball. Mind you, our subconscious mind learns on our bad and good experiences.

Next recommendation from the author is the idea of swinging underhanded up to the ball. Rodgers wants us to swing our arms down as low as possible while releasing lag angles as soon as possible. Obviously it should be a good receipt for lengthening the flat spot by starting it as early as possible before the ball. As our readers may remember from the 'Skipping Stones in Troy. OTT from Inside Revisited' article we argued that the majority of golfers need exactly the opposite idea to skipping stones move because it is not natural for them at all. Moreover, while recommending the slap-hinge release type with the in-to-in path we do not want at all the flat spot to start so early before the ball; neither we do want to base the downswing on a linear slide over the ball (it is worth mentioning here, however, that Rodgers is an advocate of the in-to-out swing path) -- hence we are not with the author here. 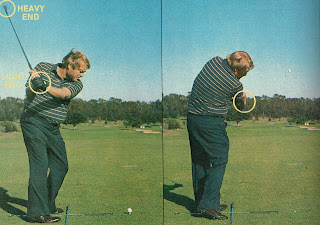 According to Rodgers we should keep the light end of the club (i.e. the grip) below the heavy end (i.e. the clubhead) in plane, '[...]which is another way of saying that you should swing the club on the same plane back and through. If your club is out of plane, either to the left or to the right, the clubhead will feel heavier'. And later he says: 'The clubface and shaft should always be in line with the straight arm in the swing. On the backswing and start of the downswing, the left is the straight arm. On the follow-through, it's the right'. Although we admit that this point can appear to be a little fancy, it is a valid one. We shall return to it in the part dedicated to the Bow Tie Concept. 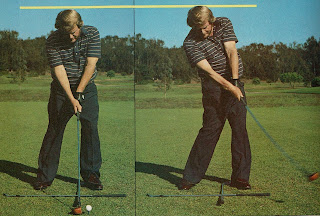 This one is really important -- we argee fully with the author. One should stand tall, should maintain one's height with minimum of flex in the knees and centered head as well as one's lead side should feel long while the rear one (sagittal plane) should feel low (which corresponds well to the necessity of having a decent primary and secondary axis tilts that we mentioned in the 'Mastering Slap-Hinge Release' series of articles. There should be as minimal sitting down action during the downswing as possible. We will also revert to this section while discussing the head cradle motion in the context of relationship between the arc of motion of hands and the club in the downswing phase.

'Like a pendulum, not like a metronome' -- it is the motto of the last page of the Rodgers's article. He advocates more turning than sliding which we do agree to fully. We both seem to share the thought that centered pivot swings are more efficient.

This is the essence of the great concept that Phil Rodgers thought out. Our goal now is to find the best way to automate the process of obtaining the flat spot long enough for performing the slap-hinge release while swinging in-to-in.