Firm Lead Side in the Impact Zone. Part 1.


Due to a serious car accident that I suffered at the beginning of the year * and a slow recovery from it with damaged lead side above the waist I am entering the 2015 season more methodically than ever. My legs never were my strong point considering the excessive mass they needed to support, however, luckily they did not suffer during the accident. I used to have strong upper body and decent pivot that used to do the job well no matter which side of the torso was being engaged in a given stage of the swing motion. Suddenly, it has appeared I cannot execute the downswing correctly because my lead side does not cooperate well. I wondered to think in biokinetic terms how to 'cheat' the weakness and I reminded what Lee Trevino, asked once about the main reason he was such a tremendous ballstriker, responded "I've got a pair of great legs". Indeed, when watching Trevino hit balls in his prime, it is very difficult not to pay attention to how excellent work is being done there.

We know that every good ballstriker cannot let the frame be not stable since it would make the upper body work in a rather casual irrepetable way. Abe Mitchell also said that the legs control the motion and was famous from his power shots despite rather short swing. I started to find correlations between legs work and lead side weakness while, simultaneously, watching all great ballstrikers hit balls in slo-mo. Here it is what I have concluded recently.

We all know, as per the Sagittal Plane Compression concept, how to automate the transition compression from the ground up. The most efficient way to achieve it is to do it via the process of presetting the rear ankle and knee joints (just to remind -- it does not allow to sway back while letting the rear hip to turn freely and later on automates the sequentiality of the transition). The rear leg benefits from created torques which is relatively easy a task since there is a supposed change of the orientation of the motion (transition period). However, the impact compression phase is just an entirely different thing, since there is no change in the orientation of the motion. This crucial phase relies on releasing the created energy without abrupt stopping of the entire motion in certain areas of the hum an body. The SPC concept shows very clearily how it is done from the biokinetic point of view. Let us remind the essence from that article here: "The ball position indicates vertically when the chain is being released correctly. It means that the lead shoulder should (hypothetically) stall at this line in order to let the distal limb and, consequently, the clubshaft and clubhead to release the energy and achieve the peak velocity. If the lead shoulder continues to move linearily to the target in a 2-D, the chain wouldn't be released at all. However, if the lead shoulder, which must be still in rapid motion, stops to move horizontally and starts to move vertically up (say, on the red line up) in 3-D, so the chain must be released because its position in relation to the ball does not change in the horizontal 2-D sense - say, the ball "sees" the lead shoulder stalls completely." 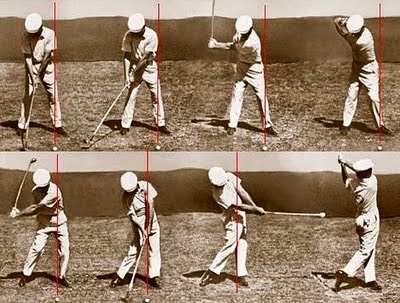 The lead side should not stall then, however, there are symptoms of stalling though. Slowing rate of the body rotation at the very impact zone combined with upward movement of the lead side can be the desired one -- even, in some severe cases, up to a momentary reverse pivot rotation (vide Johnny Farrell of old times or Rory McIlroy of the modern ones).

What should be avoided and what is an error ? Well, first a premature stalling of body movement resulting in thrusting the arms forward while losing the connection with the main body and often ending with a dreaded crossover release; second, the spinout, i.e. loose unstopped rotation of the body together with arms giving weak impact conditions. As far as the lead leg counts, it should be in the process of firm straightening but never snapped up straight before impact or never loosely bent forever through the entire impact zone without a sign of firming action. It can remain fairly bent as well as be almost rigidly straight -- the range is not small here -- however, there is a strong common denominator here, namely, it has to be firm throughout the whole impact compression phase. What happens later on, during the follow-through, as a reaction is not of any importance here (one can have the lead leg completely straight as well as one can re-bend the leg more as e.g. the way the great Byron Nelson used to do). What is very interesting one can easily observe that the pelvifemoral motion of the greats consists of extension of the hips without hyperextension of the lumbar spine -- just as tucking the bottom in helps to straighten the legs without snapping them straight (that can be bad for knee joints).

The question is how to find and introduce a little of automatism to this stage then and to be in the range of having one of such looks of a superbly achieved firm lead side at the impact zone ? Look at these greats through the ages from this interesting angle and wait for some answers that are coming in the second part of the material soon: