When growing older (and being far from having a perfect body shape) it is more and more tough to use the push release that must be accompanied by excellent body pivot. The entire season of 2017 I was struggling to obtain desirable effect with my current swing. It is still very reliable and repeatable, however, both distances achieved as well as tendency to leave the clubface open at impact (mainly with longer clubs) forced me to reshape my swing to be based on less dynamic pivot and slap-hinge release type. Last several rounds were promising enough for me to start working on this subject and trying to make slap-hinge release swing motion less prone to timing (automate it, so to speak).

Let me write first a few words about the three releases. I did mention this release type in the "OTT from Inside" article illustrating it with a great sequence of Wild Bill Mehlhorn, however it was just an iceberg's top.
It's enough to classify them depending on what happens with the clubface in the impact zone. We humans are being built the way that there are no many possibilities left. In fact, there are only three pure models (and as usually, when there are pure models almost always a mixture of them must be taken into account):

2. wrists themselves are uncocking/unhinging at the impact zone causing a clubhead turn in a vertical plane - the clubhead is being delivered square to the arc and leaving it square to the arc as well. The ball "feels" it is forced to be vertically spun. Loft is changing during impact. The slap-hinge release.

3. wrists themselves are doing literally nothing in the impact zone - the clubhead is being delivered square to the arc and is leaving it square; the ball "feels" nothing odd apart from being hit according to the swing plane. Neither extra horizontal or vertical spin is being added nor loft is changing during impact. The push release.

(last but not least - a remark: forearms must roll somewhere during the swing (so-called "swivel") because this is the way we are built. The crucial part in distinguishing a crossover release from the two other releases is to observe when it is happening. The support of the body turn, depending on the release, is also very important.)


In view of the above, it is not hard to conclude that the push release type is less timing-dependent of all three and that's why the best ballstrikers in the history used this release type (with some notable exceptions such as already mentioned Bill Mehlhorn, Sir Henry Cotton or even late post-accident Hogan). The slap-hinge release,  although being more timing-prone, is a much better option for an average hacker than disastrous crossover release that would require an incredible timing sense and lots of training hours. 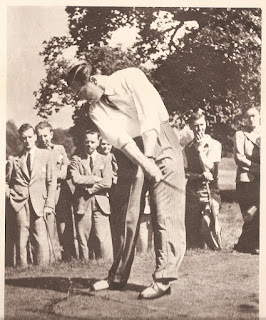 Now, let me quote Sir Henry Cotton (above), genius golf theorist and excellent playing pro, who sacrificed more time to research types of release than probably all others combined. He noticed as follows (calling the slap-hinge action 'flicking'):

'The wrists can work in many ways: they can help to combine a push with the flick, or a roll with the flick. It is difficult to define exactly the part they play in the golf swing and to separate their action for analysis, but from observation I should say that they work best when they combine with arms and body to form a smooth action.'

'Players who use a minimum of wrist-work -- those who push the ball with a stiff-armed action -- can be well advised to acquire a flick of the wrists; this can be done by hitting the ball with less follow-through during practice. "Hitting and stopping" -- pupils of the "cotton School" will know this expression.
Those who whip the ball, and use therefore only a wrist-flick, can build their game by cultivating an arm swing -- a push, in fact. I have found during teaching that players go into these two classes and few combine immediately the flick and the push to the best advantage to get the maximum results from their physical attributes.'

'To bring the club-face square to the ball at impact, and at the required speed, is the aim of every player, and we go to the trouble of learning a system in order to effect this. At present the only way to get sufficient power into a full shot is to use a turning and flicking action. The square face "all the way back and through" extends in general only to putts and short runs-up. There are players who grip the  club with the left hand on the top of the shaft, showing four knuckles, but they only shut the face of the club because of the grip, and not because left wrist is holding the face square to the ball all the way, as it were. This would, however, happen in an extended hinged left-wrist action all the way to the top.'

'I am sure that a gradual squaring up of the face on the way down is safer than a quick unwinding hit, and so, as I have advised before, a combination hit and push is preferable. Most succesful players use the hingeing of the left wrist more than they imagine.'

'Players who use a snap turn of the wrists usually hit a long ball as they are late hitters, but they are apt to misjudge this turn when under pressure. I prefer to see a player use some proportion of push in his shots when he has to produce winners.'

We shall start to depict some discoveries we made in the next article soon.