A natural consequence of finding excellent application of the Golden Axis in the downswing phase is verifying its usefulness in the backswing phase. This urge is being certainly enhanced either by opinions of such greats as Johnny Miller or Nick Faldo researches of such genial theorists as Mac O'Grady who all recommended the so-called early set of the wrists. For instance, Johnny Miller writes in his great book 'Pure Golf': "The early cocking action sets up the late release. But equally important is the fact that wrists have to cock somewhere and, when they do, they must cock without disturbing the angle in the left wrist. Otherwise, the clubface will not be maintained in a square position. It is not only more natural to set the hands early. it is frankly far easier to do than the late cocking since the club is still in front of you in the early set and the club is traveling so much slower at this early stage of the backswing than toward the end of the backswing." 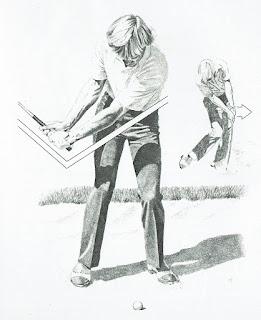 While we surely appreciate the afore-mentioned points and gladly neglect Miller's lack of anatomical know-how, we rather prefer to concentrate on channeling the clubhead momentum through the Golden Axis of the lead wrist as the main goal that leads to eliminating redundant rotation of forearms not responding to the clubhead's CoG momentum. This is especially important as excessive forearm rotation gives the feeling (and in fact provides it) of accumulating power during the downswing phase. It brings some problems as well -- first, sucking the clubhead too low and to the inside too much (it is difficult to remain on this plane later on) and secondly, jeopardizing the clubface stability (that might have serious repercussions when fighting for the clubface stability in the wide impact zone). Of course some procedures as e.g. Scapular Plane Humerus Takeaway may vividly help but will not eliminate all possible errors. One thing is very important and we are in a full accordance with Johnny Miller -- the earlier the wrist acts the smaller are the chances for forearm rotation to occur. Let us show the comparison of the author's swing without (left, white shirt) and with (right, dark shirt) Golden Axis backswing below:

Biokinetic sequence of momentum transfer throughout the whole swing motion along the Golden Axis of the lead wrist is then radial deviation coupled with dorsi flexion (a good abbreviation would be 'radial extension') at transition it starts to transform gradually into almost full ulnar deviation coupled with palmar flexion (a good abbreviation would be 'ulnar flexion') approaching impact and then it transforms again into radial deviation coupled with dorsi flexion (i.e. into 'radial extension') after separation. A very good validation of this sequence is the fact that if, theoretically, a man would like to mimic a golf swing with a very heavy object (say, a spade) using a golf grip he can do it relatively easy without losing balance with this sequence only. The conversion into 'ulnar flexion' during the downswing phase does not happen at transition otherwise lag angle is lost momentarily -- mind you, palmar flexion reduces radial deviation inevitably. Therefore, it happens automatically late in the downswing when momentum is too big for the wrists to stay in 'radial extension'.

It is to be pointed out that the rear hand can be of a huge help to secure the Golden Axis of the lead wrist during the backswing phase but only when the rear wrist can also act more or less on this axis. It is possible with the Bio-K grip, i.e. when both hands are in natural position on the grip (and not in a parallel opposite position as many teachers recommend because it would force one of the forearms to rotate in order to accomodate). In this scenario, a golfer can concentrate on guiding the momentum via both wrists or even via the rear hand if one is accustomed to the rear side backswing. This backswing biokinetic sequence could be described as gradual transformation of a tiny 'radial extension' of both wrists established at address into a full 'radial extension' of both wrists at the top (maximizing all angles while maintaining the rear hand in the 'holding tray' desired position). Then from the top, resulting from the change of the orientation during the transition, clubhead momentum shallows the plane neutralizing full 'radial extension' of the lead wrist while maximizing it in the rear wrist. Please see a beautiful angle of the Henry Cotton's transition below:

The Golden Angle address universality is also worth underlining. Since some golfers prefer to have high hands at set-up it means that they are more on the 'ulnar flexion' side while those who prefer low set-up of hands (as e.g. Mac O'Grady advocates) have their lead wrist already slightly 'radially extended'. The lower hands' position appears to be better as the angle has already been established in right direction and there are practically no room for any redundant forearm rotation to occur, however, high hands at set-up can be offset by their more mid-body position. When we compare Mac O'Grady's low 'y-shaped' position (the so-called 'impact fix') with Ben Hogan's high 'Y-shaped' mid-body one we can easily see that both make sense. However, if someone prefers a low 'Y-shaped' position or a high 'y-shaped' one will meet certain problems in reaching optimal Golden Axis channeling process. 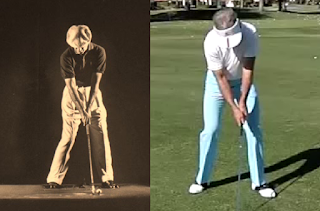 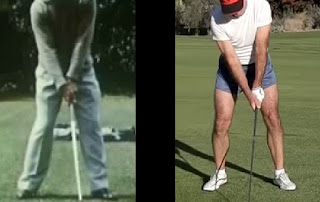